Exes For Eyes is a new metal from Canada formed by Dave Sheldon (Man With Target, Annihilator) and Big James Arsenian (Endast, Authors). In 2011 they released their debut The Amsler Grid on Year Of The Sun Records which was produced, mixed and mastered by guitarist Dave Sheldon. Dave recently put life on hold to discuss the power of his laptop and how it helped him create such a great record.

What one piece of equipment do you use to obtain your signature sound?
Dave: I’ll be completely honest. It’s not my guitar, it’s not my amp, it’s not an effect pedal… I’d like to say it’s my left hand, but that’s just egotistical lol. All those things are great, and I’ve got some fantastic pieces in my collection, but the 1 piece of equipment I use to achieve any sound I desire is my computer. I wouldn’t be half the musician I am if it wasn’t for my Laptop.

What about it makes it so important to you?
Dave: I can do anything on my computer. Even if I can’t do it YET, I can record my ideas, stitch them together to create something and then I have no choice but to relearn and perfect what I’ve recorded for the live show. Computers enable me. I think every Musician should learn to record their own ideas. Even if just to demo Pre Production for a Pro-studio. I don’t have the luxury to practice guitar 8 hours a day anymore. I’m almost 30. I’ve got a studio and a mortgage, and the grown-up world I said I’d never become part of has slowly but surely entered my life. Excuses? Maybe. But, My computer allows me to streamline the creative process by utilizing a fantastic editing DAW (Pro Tools), some very realistic audio plug-ins like IK’s Amplitube 3 and Toon Track’s Superior Drummer and EZX lines, and gives me studio quality results for some of the most simplistic demos in a matter of minutes. If I didn’t own a computer, I’d be screwed. 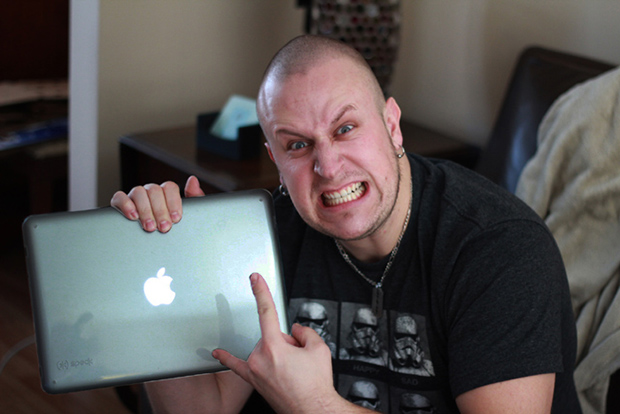 What are the major pros and cons?
Dave: The major Pro is that there are no cons! Haha! Well, that’s not all true. But really, having a fully functional studio in the contents of my laptop case is just THE BEST. Hard drives can fail, quality plug-ins are expensive, but when it boils down to it, world class analog is the easiest to move around, and not everyone can be Dave Grohl. I guess the biggest con would be an infinite ability to tweak. In an analog realm, what’s done is done. Print it, and move on. With Computers, I can record something now and continue to tweak the raw file until I’m happy, and let’s face it, as musicians and artists we’re never REALLY happy. If we have an infinite ability to tweak, we’ll do it up until the day it goes to get pressed…and sometimes that’s a blessing! I re-amped guitars for our record The Amsler Grid but a few days before being sent to get pressed. We sat on the mixes for almost a year, and I chose to change the sound a few days before duplication. Ballsy move, but worth it in the end, and I wouldn’t have been able to do it if it wasn’t for a computer.

How long have you used this piece of equipment and would you ever change it?
Dave: I’ve been utilizing computer-based recording since 2002, and entered the world of Pro Tools in 2004. I was about to go to post-secondary school for recording engineering when I got the chance to intern at a friend’s studio. It was a Game-Changer. I learned Pro Tools on the fly, learned the general ins and outs of analog equipment, and learned what it takes to make a great sounding record. A lot of love, a lot of gear, and a lot of mistakes. You won’t start to make good sounding records until you make a few bad ones! But really, I can make 20 different mixes in Pro Tools and use the best one, and the people at home will never know it was mix 20 0f 27 that made the record. They’ll never hear the bad ones. 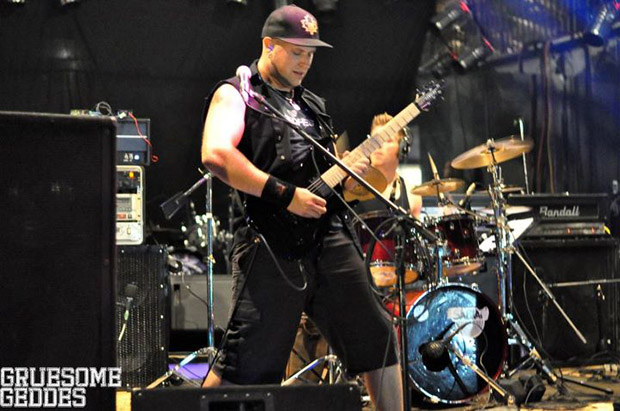 Any final thoughts or comments on the gear?
Dave: Computer based recording is a beautiful thing. I can tweak things until I see it as 100% correct. We’re in a very cool and innovative period of time. The game is constantly changing, and I’m just trying to make a few moves to stay in it. Some pieces of gear I can recommend to make the process a lot more fun?

Amplitube 3 by IK Multimedia. The guitar amp sims/emulators are sooooo nice. Very realistic. Times have changed. They’re nailing things. The “Custom Shop” is a thing of beauty! Companies like Soldano, Jet City, Engl, Orange, they all have Amp Models available now. You can change the head, the cab, the speakers, the size, the mic and the placement, all with the click and drag of a mouse. There are even complete pedal boards and rack setups. It’s ridiculous. The cats at IK know what’s up. I highly recommend it. Also, check what my boy Mattias Eklund and the rest of the Toontrack cats are doing. Everything from EZ Drummer and Superior’s 2.0’s Metal Foundry to the EZ Mix engine and the entire line of artist presets. Talk about streamlining! You want great drums sounds and mixes with the click of a button? The beats and fills are drag-and-drop midi, the samples are world class recordings with world renowned artists, and you can get it all started with about $100! These are tools made with songwriters in mind, not recording engineers. They have some of the best engineers already dialing stuff in so you don’t have to. They’re letting songwriters focus on song writing and in the process have given the end-user a chance to have their stuff stand up, and next to, some of the best sounding records made…and its all computer based. GODDAMN I love my laptop. 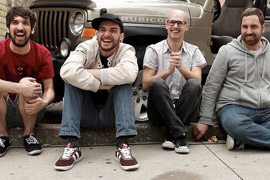 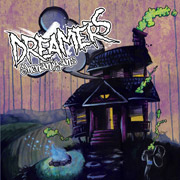