Learning from past experience is a sign of wisdom. And whatever you want to say about Megadeth leader Dave Mustaine, you can’t deny his intelligence. Although he had the vision to launch Gigantour years before the touring circuit became glutted with rock fests, that first trek in 2005 struggled to fill venues despite carrying such proven names as Dream Theater and Opeth on the bill. Gigantour returned in 2006 as a dual-stage event, then trimmed down to one stage and five acts for its 2008 North American run. That third tour was the proverbial charm, setting the stage for Gigantour 2012: It’s playing in a mix of amphitheaters and theaters, and being booked in cold-weather months to avoid getting lost in the usual onslaught of summer concerts.

When Gigantour visited the Theater at Madison Square Garden on January 28th, longtime fans jumped at the chance to see Mustaine and company in close quarters at the world’s most famous arena by buying the tickets clean. Although the tour was established to unite various shades of metal on one stage, we can’t account for how opening act Lacuna Coil performed, due to unfortunately missing the band’s set. Second band Volbeat was solid and entertaining, playing to a packed room even though the headliner wasn’t set to appear for more than an hour. Third up was the iconic Motörhead, which was its usual gritty, growling, thunderous self as it plowed through “The Chase Is Better Than The Catch,” “Killed By Death” and, naturally, “Ace Of Spades.” 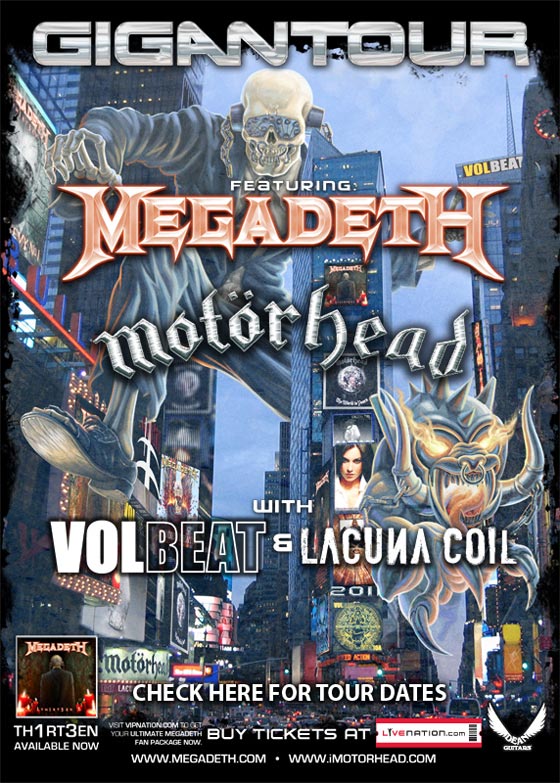 As much as Lemmy Kilmister’s presence helped pack the house, this was ultimately Megadeth’s show. It wasn’t only because the band was afforded a bigger stage, better lighting and superior sound—the act was simply incredible. Witnessing the unison among guitarist and singer Mustaine, bassist Dave Ellefson, second guitarist Chris Broderick and drummer Shawn Drover, you’d never guess that the group’s endured more lineup moves than a chess match. Their show opened with “Trust” and fired through can’t-go-wrong numbers “Wake Up Dead,” “Hanger 18” and “Sweating Bullets.” The reciprocity of energy between crowd and band was evident, with the room shouting “Die” along with almost every beat of the immortal breakdown at the end of “Wake Up Dead” and “Meg-A-Deth” whenever it could fit it into a three-note count. Besides mixing in cuts from new album TH1RT3EN like “Public Enemy No. 1,” “Guns, Drugs And Money” and “Who’s Life (Is It Anyways?)” the band also brought out semi-rarity “Angry Again” from the 1993 soundtrack to “Last Action Hero.”

Speaking of nearly 20 years passing by, while kids as young as 12 were taking up space in the aisles, the amount of gray hair and expanded waistlines in the audience was noticeable. Mustaine directly acknowledged time gone by by bringing his 14-year-old daughter onstage to sing her a swift, thrashed-up version of “Happy Birthday” during a walloping rendition of “Peace Sells . . . But Who’s Buying?,” intoning with fatherly pride, “If you ever wanted to know what a little Mustaine looked like, here it is.” But even though Mustaine welcomed Lacuna Coil singer Cristina Scabbia onstage with him for a duet of “A Tout Le Monde,” it isn’t nearly time for him to step aside to let the next musical generation through. As long as his physical prowess and unrelenting drive keep simmering like they did tonight, he won’t have to worry about retiring Rattlehead to the bone yard for a few more decades. 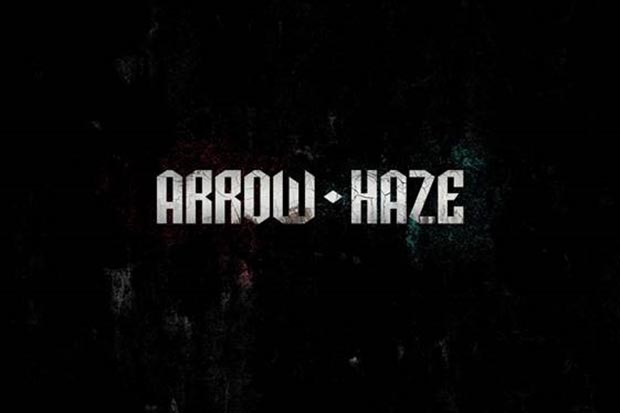