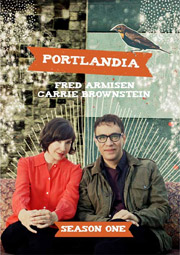 Portlandia is an IFC series that is written and created by Saturday Night Live alumni, Fred Armisen, Jonathan Krisel and Carrie Brownstien and executive produced by Lorne Michaels. Shot entirely on location in Portland, Oregon the series is made up of a numerous short character-based sketches that are as quirky as they are funny.

I am a huge fan of non-mainstream media and I am drawn to slightly off-center programs and Portlandia fits the bill just perfectly. In the first episode for example, we’re introduced to a couple of environmentally conscious diners at a local restaurant who pummel the waitress with questions about the menu’s organic, free range chicken selection. Asking questions about where they were raised, how much land they had to roam, and what they were fed, the patrons eventually feel compelled to leave the restaurant and head out to the farm itself to see the conditions the chickens grew up in first hand. Things only get weirder from there when they discover that the chicken farmer is also a cult leader.

There are guest appearances by many different celebrities including Steve Buscemi and Heather Graham. The humor is off beat and dry, (just how I like it) but if you’re a fan of Saturday Night Live or anything along those lines than this is probably going to be right up your alley.