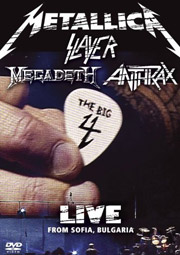 There have been many speculating a concert and tour such as this and thankfully, through online blogs, rumors and wishful thinking, the time has come! Sofia, Bulgaria was the blessed city to house a concert of such epic proportions and this metal love fest was broadcast at select theaters around the world on June 22, 2010.

For the first time ever, after 25 years of each creating the world’s best heavy metal, the four biggest bands in the genre would come together to perform for the people. We all know one cannot go on any metal rant without mentioning at least one of these four bands, it’s unheard of! There’s just no competition here; four similar, yet completely different groups each of which thrive off their fans and are so immensely influential. Metallica drummer Lars Ulrich said it best: “Who would have thought that more than 25 years after its inception, thrash metal’s big 4 would not only still be around and more popular than ever, but will now play together for the first time… what a mindfuck! Bring it on!”

Anthrax kicked off the show, fully charged and ready to go. They played a solid 45-minute set in the Bulgarian sunshine including songs off 1983’s Fist Full Of Metal; favorites “I Am The law”, “Antisocial” and “Madhouse” all brought the house down. They also did an awesome cover of “Heaven and Hell”, but by far the best part of their set was the band donning Headdresses for their song “Indians”. A touching tribute to Ronny Dio was also included.

It does always seem to rain on Megadeth, doesn’t it? They hit up the stage next through thunderous rain, but charged on. The band was as polished as ever and ran a tight ship. As the set moved forward, the band seemed to open up and let the crowd have it. Dave Mustaine smiled to the sea of fans numerous times and you felt that “the hatchet” has been sincerely buried. “Holy Wars” opened the set and the crowd instantly charged. The rain didn’t stop these fans; soaked in their metal t-shirts they carried on like soldiers in the trenches and undoubtedly enjoyed “Sweating Bullets”, newly-released “Headcrusher”, “Symphony of Destruction” and “Hanger 18” from 1990’s Rust in Peace. With air drumming, head bobbing, and more, the crowd was pumped and a sincere thank you from Mustaine at the end of the set made it genuine.

Slayer, who also had a 45 minute set, opened with “World Painted Blood”. The stage was loaded with 24 speakers and no backdrop, and though they had some short tech problems, the music was damn solid! Slayer charged through their set like there was no tomorrow and mosh pits flew out of control; not at the sight of Kerry King’s huge porcupine spiked gauntlet, but for the music itself. If this was your first time experiencing Slayer live, then you were assaulted! – their speed, sound, and power is incredible. After their set, there was a Dio tribute which took over the screen with pre-recorded messages from the bands. Sharing memories, stories and more, this ten minute tribute was truly honorable.

Metallica closed out the show and opened their 75 minute set with “Creeping Death”. From old faves to newer songs, their set just exploded. Everything one could want in Metallica show was present: a huge stage to run across, a big stack of Marshall amps, leather pants and studded belts, and most off all, thousands upon thousands of fans who all raged and soldiered through rain and wind just to rock out to the biggest of the four bands.

It’s undeniable, while they may have enjoyed other bands’ sets, it was Metallica who stole the show. The music was spot on and the 75-minute set was pure heart-pounding, electrifying mayhem! As a bonus, midway through Metallica’s set, the other bands joined the stage all jamming along to “Am I Evil”; a spectacle in itself, with Broderick, Mustaine, Hanneman, King, Ian, Caggiano, Hetfield and Hammett all playing in unison.

The show as a whole is AMAZING! This was the BIG FOUR and it was a historical event in music history. If you missed the show or haven’t checked out the DVD or Blu-Ray, you NEED to do so. This is a must-have for all metal heads!

Check out the DVD trailer