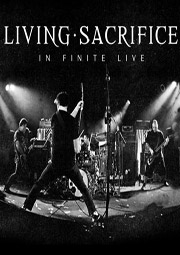 Living Sacrifice is regarded as one of the most influential bands in the Christian metal music scene; they were indeed one of the first bands to play heavy, thrashy Christian Music. Since 1989 they’ve released seven full-length records and have toured the world numerous times. This DVD was filmed on August 15th, 2009 in Pomona, California and captures the band doing what they do best; rocking a packed house.

From the moment they take the stage the raw power and aggression is palpable. This is a tight, hard-hitting set that really packs a punch. I’ve never had a chance to see the band live so I was super-stoked to sit and watch this DVD; I was not disappointed. Front man Bruce Fitzhugh is extremely intense and focused, so much so that there is virtually no chit chatting with the crowd between songs (aside from a brief moment of crowd interaction towards the end). This does not take away from the incredibly passionate performance however, and let me tell you, this is one heck of a performance.

The DVD comes with a bunch of extra goodies as well. Viewers will get a look behind the scenes of the making of two videos as well as another six song live performance filmed on December 18th, 2010. The quality is not as good as the main video, but it’s still more than watchable. Bottom line, this is a fantastic DVD that I think captures Living Sacrifice at their very best.

Check out the song: “Bloodwork”