Check out the song: “Heaven Help Us”

The Cautioneers are a rock band from Toronto, ON who recently released their hot new EP, Where We Are. Before the holidays I got the chance to email vocalist and guitarist Stephen Cooper some questions to learn more about this new album and the meaning behind their band name. Check out the interview below.

How did the band start?
Stephen: We converged slowly over the course of a year. I had been recording demos in my basement and often had Amanda’s help with backup vocals on those early recordings. We knew each other from high school and the same applies for Adam and Andrew. We invited Brandon to the fold and began jamming in the bedroom and cramped hallway of, then guitarist, Adam Tomaszewski – who we knew through a mutual friend. It came together quite organically – though it took us a bit of time to realize what direction we were headed. Eventually Adam stepped down as guitarist and my roommate Greg took lead… and here we are.

Where did the name The Cautioneers come from?
Stephen: It’s just a made up word… to me it means: a person who acts with hesitation based on their fears, but I can’t say that’s a definitive answer, I’m sure it’s different for all of us.

You have a new EP, Where We Are. How did you guys go about writing this release?
Stephen: It was a very arduous process actually. We had been gigging the songs prior to recording, so they felt comfortable – however, they lacked a certain refinement which I love to hear in recordings. It turned into quite an obsession for me; to perfect the songs, cut the fat, and polish them. On one hand, the process created a slight rift between myself and other members of the band but I think, in finally getting it finished, we’ve reached an understanding and are very proud of the result. Sometimes it’s hard to see the forest for the trees.

Who created the cover art?
Stephen: A friend from high school named Salvatore Angileri did the art. He’s brilliant.

What made you decide to name the album Where We Are?
Stephen: It represents our current place in time… not the band, or us individually, rather everyone and their current existence and place in the world. I feel it mainly focuses on being comfortable with where and who you are. 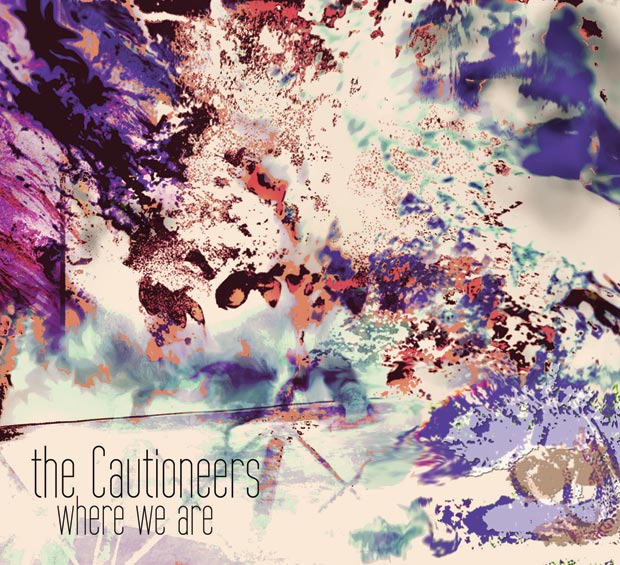 Lyrically what do you guys write about?
Stephen: It really depends on what’s happening in my life at the moment. On Where We Are there are certainly themes regarding transition and conclusion; the death or end of something and the residual feelings that follow.

How would you describe your sound to someone who doesn’t know rock?
Stephen: It’s expansive. Imagine yourself on a roller-coaster or amusement ride that throws you into the air and then brings you down softly.

For fun let’s say you guys got to choose two bands to open for you, big or small. Who would it be and why?
Stephen: Are we including past or present bands to? Because thats a whole other ball game.

When you are not rocking out with The Cautioneers what are you doing?
Stephen: working. haha…

What are the future plans for The Cautioneers?
Stephen: Well, we’ve already begun to write a handful of new songs – so another release will likely be in the works. But It’s hard to say at this moment… we would rather just take it as it comes.