With only one lineup change, Lifestory:Monologue has stood strong for six years. This band emerged from close-knit friendships, and a passionate love for music. Lifestory:Monologue is self-managed, and the boys are busy touring every chance that they can. Humorous, in depth, and honest, Jason Gormley and Jay Reid told me what Lifestory:Monolgue was all about. The group is hardworking, and is already thinking about their next record, which they hope to release as soon as they can!

How long have you been together? Tell me a bit about yourselves!
LM: Lifestory: Monologue has been in existence for almost 8 years now. Most of us have known each other since high-school or earlier. Zac and Jay were in grade 6 together. Lifestory formed out of the breakup of other bands and those bands were awful. Seriously, we have recordings and you’ll hopefully never hear them. I guess it was kind of like multiplication in the sense that two negatives made a positive. In the last few years we lost our original guitar player and found our new man, Mike Short. He made the cut because he was a ginger. Since he joined there’s been dramatic uplift in overall band enthusiasm, probably because of the addition of more red hair. Despite some great moments on the road with La Dispute, Make Do And Mend and Balance And Composure we’ve more or less been holed up writing, rewriting, recording, mixing and mastering our new release Drag Your White Fur – Make It Grey which is now available to pre-order for the release on November 8th. It has been a long time coming, and we are all very excited to get back on the road to support it after such an introverted stint.

Only one lineup change? How did you manage that!?
LM: As I mentioned, we were all friends in high school and this band has been our life for the past 4 to 6 years. I think all of us having a communal passion for music as well as that strong base of friendship underlying everything has allowed us to persevere through any tough times we have come across and also even more so allowed us to really revel in and embrace the life changing moments this band has provided us.

Who are your main influences?
LM: We recently did a Thrice tribute show at a small dive bar in our hometown. Why Thrice? Well, that was pretty much the only band we all could collectively and confidently say we all liked. However, much of our influence stems from the bands we grew up on; Thursday, mewithoutYou and Moneen would probably be our biggest influences we all agree on plus a bunch of post-rock, but this list would change depending which member you asked individually. 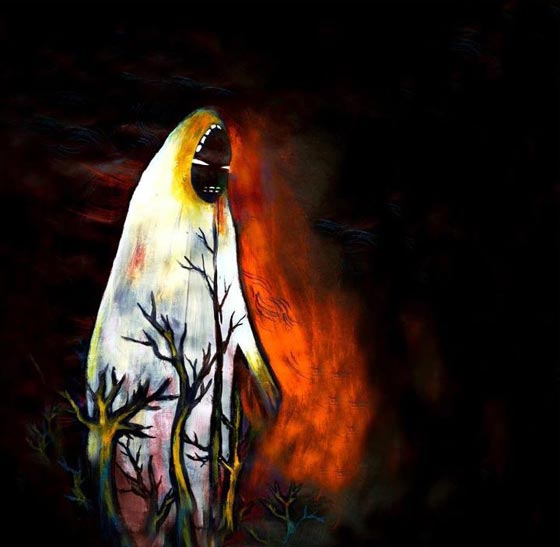 Your ’08 release, Hold Me In The Wind, My Friend sounds very experimental and ambient. Your 2011 release, The Thornberry, is heavier and the vocals are more “in your face” What direction are you heading in with your upcoming release?
LM: Drag Your White Fur – Make It Grey comes from the same sessions we did with .Moneen.’s Kenny Bridges that produced the Thornberry EP. So in that sense it will be very similar sonically. However, the EP was intentionally released to be a taste of what was to come on the new album and as such, certain decisions were made as to which songs were on it. The album will definitely have a broader spectrum, as a full length leaves more room for expansion. There is song with only singing, there is a song with nearly all yelling, a few heavier songs, a few longer songs and a few shorter songs. All in all the album is intended to be a summation of everything the band has done in the past, taken in new directions, so if you’ve enjoyed our previous releases expect to find something you will like on this record. However, you can also expect to hear new things, like baritone guitars and horn sections.

What’s your favorite venue to play at?
LM: Over the summer we had the opportunity to open for one of our favorite bands, mewithoutYou, at Lee’s palace in Toronto. This was probably my favorite venue we have ever played. Partly due to the moment of living out a goal I had since about the age of 15, but also due to the fact that the stage sounded great and felt awesome to play on. Overall good vibes.

That being said, many other cities and venues would be a very close second, as it is more the crowd and the interaction with them that we have always thrived on beyond the actual size or sound of a venue. The people who come out to see us, many of whom have been doing so loyally for years now, are what really make the show memorable for me.

There was a venue in Niagara we played that was so small that Zac’s keyboard could only be placed in front of the door. While we played it was impossible for anyone to enter or exit the venue. We changed our name that night to Fire Hazard.

Favorite band you’ve played with?
LM: The mewithoutYou show in Toronto would be up there near the top of the list. Although, we’ve made so many friends doing this over the years that it would be hard to narrow it down. Shotgun Rules, Farewell To Freeway, A Sight For Sewn Eyes, La Dispute, are a few I can name that started as bands we were playing with and wound up becoming friends.

Check out the song: “Candles”

Tell me a little about how the songwriting is done. Is it a collaborative effort?
LM: Yes. Some songs start either as one riff, rhythm or idea wherein a semi-improvised jam eventually coaxes out a more rigid structure. The song “Lessons” off Drag Your White Fur – Make It Grey was almost entirely written during a sound-check. However, for the new record most songs were brought to rehearsal as a nearly complete idea and then once it is played in full with the band we will revamp it to fit how it plays as a full song rather than 6 parts written by one member.

In the past we would often finish a song and leave it finalized as the first version. Kenny Bridges really encouraged us in the pre-production process to try everything we could with a song before we called it “finished”. Some songs probably went through 15 or 20 different versions, in different time signatures before the one you hear on the record. About five minutes before we recorded the song “Stations” we changed the time signature of the chorus. Overall, because of this I think all of us are happier and more proud of these songs than anything we have done in the past.

Where do you see yourselves in another 5 years?
LM: Hopefully still doing what we are doing! This album has taken a long time to put together, so we are already talking about the next record and aiming to have a much smaller time gap between this and the next one. More so we are just excited to get out on the road and show people what we have been working so hard on for so long.

So, 5 years from now hopefully we have a few more records under our belt and are still out playing as much as, if not more than we are going to be on this album.

Any further comments for your fans?
LM: Our fans are the reason we keep doing this. I guess most of all I would just say thank you to everyone who has stuck with us over the past 3 years while we have gone through the process that has made Drag Your White Fur – Make It Grey. More than anything we love playing live because of the people who come to see us. That’s the end game that makes all the hard work seem worth it.