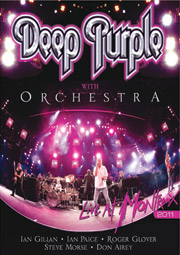 This performance was filmed live at Montreux in 2011 and features Deep Purple accompanied by a full philharmonic orchestra. This is not the original cast though, as Steve Morse has taken over the guitar duties and legendary keyboardist Don Airey fills in for John Lord. Substitutions aside, the band does a really good job of ripping through many of their classic hits all nicely reworked to include a background orchestra.

The result is not as odd as it might sound and I think it works quite well, giving new life to some really old tunes such as “Highway Star,” “Woman from Tokyo” and “Smoke On Water.” The caliber of musicians onstage for this lineup is phenomenal and as you would expect, the performance is super-tight. On a slightly downside; however, I found it a bit disappointing that Ian Gillan is not able to hit certain notes like he once was. On several occasions he struggles to reach the notes that once came to him flawlessly. That said, and in my opinion, Gillan remains one of the greatest all time front men and he still has an amazing presence during this performance.

Even with some slight vocal mishaps, the band turns in a really good, high-energy performance that is well worth the price of admission. This Blu-Ray also includes a bonus interview with the band that is both entertaining and informative.

Check out the song: “Strange Kind Of Woman”