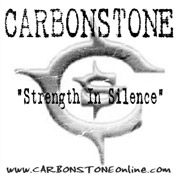 Maryland-based Carbonstone takes modern rock, nu-metal, alternative metal and the works, right back to basics. This quartet has been around since 2005 and not only continue to build a concrete and loyal fan base, but also stay true to their signature sound built off influences such as Breaking Benjamin, Trapt, Three Days Grace and Adema.

Their 2010 EP, Strength in Silence, and another untitled 2011 promotional disc showcase a really raw, stripped down sound – simple, to the point and no beating around the bush. I have to say for me, singer Corey James’ very characteristic vocals are the most recognizable feature of Carbonstone’s music. I was impressed with his screaming – it has my stamp of approval.

The band still manages to cover a decent range of sounds while keeping it nu-metal. The song “Turn”, for example, has some bumping drumbeats and bass work that is a crowd-pleaser, while other songs like “Storm” are slower with fuller chords, capturing the moody, melancholic emotions portrayed.

One disappointing aspect of these records however, is the sound quality. While being decent enough, it definitely does not do justice to how Carbonstone sounds live – they put forth a power-packed, energetic performance indeed, and the music is fun and easy to rock out to. Then again, the latest effort is impressive for being a self-produced record. More music and videos are coming out very soon (such as the video for “Storm”) so stay tuned for an even bigger and better sound!

Check out the song: “Faded”