The Canadian Thanksgiving weekend was upon us and for October, it was a damn warm night. 28 degrees Celsius; nuts, yes, but a good way to foreshadow the events of the night. Kicking the night off with a bang was Toronto’s own, white-shirt clad, Dancing With Paris. Definitely the heaviest of the night, these boys always put on a good show and never disappoint. DWP’s set had a good mix of old favourites and tracks off their new album, The Drought, which was released only a few weeks ago (also debuting at #2 on the iTunes Metal charts). Regardless of the song, kids were either moshing or singing along and grabbing at the mic.

Next up, A Sight For Sewn Eyes from Halifax, Nova Scotia. Didn’t dig the sound or the lack of white shirts, but these dudes were pretty rad when I met them before the show. The crowd definitely dug these dudes though, and the circle pits were massive, definitely check these dudes if you’re a metalhead. Much love boys.

Third smoke break since the doors opened, the faint sound of a line check can be heard. Yep, Modern Miniatures is about to go on. There is definitely more people in the venue than when I went outside. I’ve never heard this band before but I’ve heard stories and good things. Dug the sound, just wish they hadn’t messed up on a few of the songs [insert sad face].

Either way, Modern Miniatures put on a sweet live show. The vocalist even showed his love (no pun intended) for wrestling by dawning a Brett “The Hitman” Hart onesie; basically pink spandex with hearts up the right leg, the rest of the suit was covered by a tank top for most of the set. Though I’m usually all about a cohesive stage appearance, these dudes made it work. The mosh pits were huge and the kids were going crazy.

It was almost 9 o’clock and all the kids were done their family dinners, just in time for Dead & Divine (did I mention the show had to be over by 10?). D&D definitely rocked the house, all the calls were responded to, the mosh pits were even bigger and I felt like an angry teenager again just from watching all of this. I haven’t seen, nor listened to, Dead & Divine in years but I was impressed that they still had a decent-size following and people ditched the fam jams just to catch the set.

Just as I remembered, Dead & Divine had a rockin’ live show with strobes that matched and intensified the stage presence of the entire band. I was glad to see that at least one hardcore band is still sticking to the mid-2000s on-stage stylings. Kids were desperately trying to get to the front just for a closer glimpse, a few even rocked some stage dives (why was there no stage security?).

All-in-all, the music flowed well and it was just like the good ol’ days – boys with prettier hair than their girlfriends and a lot of angry music, good times had by all.

Check out the song: “Slumlord” 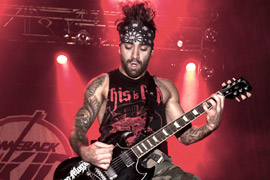