Within Temptation recently came down to Baltimore on a short tour for their latest concept album, The Unforgiving, released alongside a comic book and three short films. I had the opportunity to sit down with the beautiful Sharon Den Adel and talk about their latest and most exciting endeavors, balancing between being a mother of three and a vocalist of a symphonic metal band and overall, Within Temptation’s journey over the past decade.

I was really excited about your latest album The Unforgiving; I think it was a particularly intriguing one, with the comic book and the mini-movies. How did you come up with the idea?
Sharon: We were always thinking about how we were going to present the album. We are always searching for a good story to be inspired by and we wanted to make a concept album the first time.

So that’s how you wanted to start off?
Sharon: Yes, that’s how we started off – we wanted a concept album, and for that you really need a very good story. It didn’t matter to us what it was going to be – the story for a movie or a book. When we were growing up, it was the early 80’s and we felt like we should officially base it on a comic book, because we were reading a lot of comic books. We went to the comic store today (proceeds to show me said books).

Spawn! I miss that guy; I used to grow up on that.
Sharon: Yeah, and Wolverine. My son is called Logan because of him. 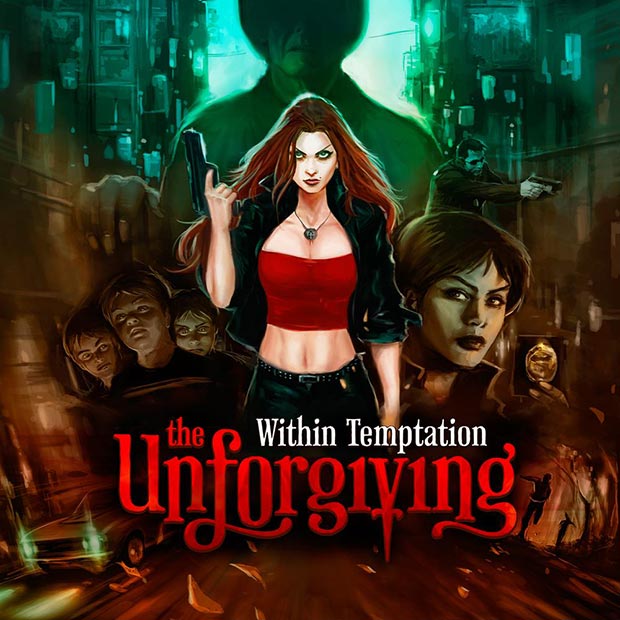 Are you serious?! That is beautiful.
Sharon: [Laughs] So the guy who was distributing our own comic gave me an original issue from 1974, when I was born. He (Wolverine) was introduced for the first time in the Marvel series.

Wow. So you have three kids now? Recently there was one more? Congratulations!
Sharon: Thank you. There’s Logan, he’s 5 months old, Aidan, who’s 2 years old and Luna, who’s 5 years old. So Logan’s the youngest, and the last one. [Laughs] The house is full!

Tell me a little bit more about working with Steven O’Connell. I haven’t had a chance to check out his previous works, but just from reading the titles (Bloodrayne, Dark 48), it seems like you found the appropriate guy.
Sharon: We worked on our previous album, wrote some songs for The Chronicles Of Spellborn (an Internet fantasy game) and we met Romano Molenaar, who’s a comic artist – he does the X-Men series here in America. He knew Steven O’Connell and introduced us to him. We were looking for a script writer because we were trying to get a movie onboard, but it’s very difficult to get a realistic release date and they kept postponing things. So we said we’re going to do our own thing and release our own comic because it’s also very visually (appealing) and it suits our music.

In the short movies, Mother Maiden says, “Guilt is a powerful motivator; redemption, an even stronger one”” and that really hit me. Your videos always have themes of good vs. evil (“The Howling” etc.), so I guess the concept album was just waiting to happen then?
Sharon: Yeah, we tried it before with The Silent Force, but things didn’t fall into place; we didn’t have the right people, creative like we are, and good in their own field. We are musicians. Of course, I can try to be a writer but I don’t have the experience, although I may do something like that in the future. The funny thing is, everyone liked the idea of the story so much, and they got inspired. Without egos, everyone was just working along, that was really cool.

What else does Robert (Westerholt) do besides the music? Is he interested in production?
Sharon: He’s been involved with making the short movies, more than I was actually. We also made short movies for all our songs -in Europe, we have LED screens in the background. But we both like so many different things, like writing, art, so you never know. When we have more spare time, we might pick it up again. Robert also likes racing cars (proceeds to show me a picture of his car on her iPhone, and Logan while I squee).

I’ve been a fan of yours for a few years now and it took me a long time to realize that you and Robert were partners who started the band. It’s been over a decade. How’s the journey been?
Sharon: It’s a learning experience because it’s not easy being in the same band, doing everything together. We have the family, the band and all your free time, you spend together. Also with the three kids, maybe he won’t be going to every show in the future, because it’s kind of heavy to always ask the grandparents to babysit three kids. But it’s been great. I don’t think you can have a relationship almost like this.

That’s true. As far as being the only female in the band, there’s always the “hot metal chick” image to deal with. Have you embraced that by now?
Sharon: No, I will never embrace it. [Laughs] It’s so far off. I can’t even relate to that kind of title, it just makes me start laughing. The guys, yeah, I’m just one of them, that’s how I see it. Of course there are certain things I can’t talk about with them, which is a pity and I miss the girls in the band, which (there) are not. But it just works. There are so many things we both like that we can talk about, so I don’t see it as a bad thing that there are just men in the band. I think there would be a lot more trouble with five girls and just one male!

Very true! So “The Heart Of Everything” was featured on “Vampire Diaries.” Any more of that? I was watching “True Blood” yesterday and thinking “Hmm, “The Howling” could really fit in here!”
Sharon: [Laughs] Exactly! Well, these things always come afterwards – it wasn’t written for the series of course – but it’s always a compliment when they use our music. I was like, “What?!” It was so amazing.

Check out the song: “Faster”

What are your future plans for the band? Any new endeavors you’re thinking of?
Sharon: Well, we’re trying to record a new album really quickly actually. We also want to continue The Unforgiving. We really like the road we have taken so far, musically and with the comic and short movies. Maybe, maybe, somewhere, it’s a dream, but we’re not sure if it’s ever going to come true but we’re working on it – just put some balloons up there and hope someone will come talk to us. [Laughs] But we’d like to make a movie out of The Unforgiving because the story is really cool.

From what I’ve seen, I think it’d make a great movie! I think what’s great about it is it’s something a lot of people can relate to – how you’re not just good because you don’t do anything bad, but how you can be bad because of something good you didn’t do (Mother Maiden says “Every man is guilty of all the good he didn’t do”).
Sharon: Exactly. Or not doing anything while something bad is happening.

Sort of like ignorance being the real evil.
Sharon: Yeah yeah, and things also change, according to different perspectives. What’s good and bad, everyone will judge in a different way. So there’s a lot of grey area, and that’s really nice to philosophize about. That’s what the story is capable of – you can really have this thought experiment on how people can look at this, with the different themes.

Any final messages for your fans?
Sharon: Just spread the word! [Laughs] We’ll be back before you know it. And we hope next time we can do a bigger show than we can do right now – maybe bring the LED screens with the movies (for each song) so people can really get into the vibe of the story. 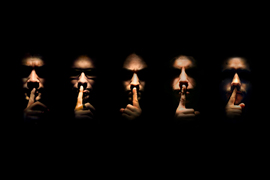