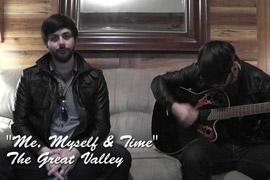 The Great Valley – “Me, Myself & Time” [Exclusive Acoustic Live Video]

The Skinny: Louis and Nick Matos, dubbed The Great Valley, have been surrounded by music their entire lives. Their mother being a music teacher and father a drummer, the brothers picked up instruments at an early age. After years of writing music together, the band released their debut EP Wrecking Ball on April 20th, 2010 which put the brothers on the map. Their new record Ruthless dropped on March 1st, 2011 and debuted at 125 on iTunes top 200 Alternative Charts.

Enjoying online success, the record was picked up by Hot Topic to be distributed into 35 stores across Delaware, New Jersey, Pennsylvania, and Maryland. Shortly after, The Great Valley caught the attention of AOL Music director Peter Schiecke who immediately wanted to team up with the band for a feature on AOL. Wanting to give back to their fans, the band & AOL Music released 3 acoustic songs for free. “Stripped” was released on August 10th, 2010. A few weeks later, the band released their highly anticipated music video for their single “Wrecking Ball” on YouTube, AOLMusic.com and SingingFool.com.

Armed with their latest effort Ruthless Louis and Nick prove The Great Valley is here to stay for many years to come so you might as well get used to it. This all said, please enjoy this exclusive, live acoustic video of their hit song, “Me, Myself & Time”.