Ripple Music has teamed up The Obelisk, one of the world’s leading sites for oil-stained, heavy rock and roll, to host a sneak peak of the new Grifter single “Unwelcome Guest”. That’s right! Pop on over to HERE right now, and get your taste of the full-throttle rawk and roll of Grifter’s debut full-length.

Then prepare for the world-wide release of the Grifter self-titled CD on Tuesday, October 4th. Originally formed in 2003, Grifter has spent the better part of the last decade spreading their blues-based, riff heavy rock n’ roll message across the UK via live shows and a ton of physical and digital EP’s. Following their nitro-fueled contributions to the Ripple Music released ‘Heavy Ripples Vol.1′ double-7″ rock bonanza, Grifter is ready to unleash their Harley revvin’ good time on a world-wide level!

And prepare yourself to catch the energy live, as Grifter rounds out the year performing throughout the south of England, and preparing for a tour of UK and parts of Europe. Maybe we’ll even be so lucky as to find the boys hitting the states soon! 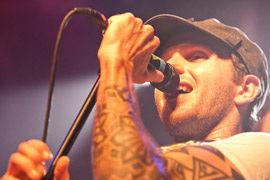