Even though they’ve only had two years since forming, Stretford End has been on a tear recently. Formed in Berkeley, California, this three-piece alternative rock band has really taken off, largely thanks to the much anticipated release of their first of a three series collection of EPs, Letters on Sunspots: Siderevs Nvncivs. While I won’t sit here and try to speculate what the title means, I will tell you that this five song EP is a solid collection of alt rock tunes that shows off the band’s rapidly progressing song writing and maturity.

The first song “Drift” begins with a slow vocal lead in by lead singer Alexander Millar before transitioning into a punching and quick beat. It’s probably the best track of the five and the most ‘rocking’ if you will. What’s also impressive is its very deep instrumentation that you might not expect from a relatively new band. Track two “Carry On” is carried by its awesome chorus and positive message to “carry on” even in the face of adversity.

“The Fates” is the EP’s first single which comes as a bit of a surprise. It’s probably my least favourite song of the five and I think the quality of the work would be much better represented by either “Drift” or “Carry On.” “You’ll Never Know” features Millar on a duet with a female singer (not sure of her name) and features a mellower side of Stretford End. It’s your typical love sick, relationship power ballad that isn’t bad, but the female vocals sound too poppy and don’t quite fit in very well with the sound of the song or the band. Finally, “The Believers” is another slower number with Millar encouraging the listener not to “give up.” This song has great radio appeal, a splendid guitar solo and should make for a great set closer.

If Letters on Sunspots is any indication then Streford End is onto something positive. It appeals to the rock and alternative audience but also to those who enjoy a more mid-tempo, pop sound. In other words, this band would sound great on the Van’s Warped Tour, but they also wouldn’t be out of place on a Top 40 radio station. Very good song writing with a widely appealing sound.

Check out the song “The Fates” 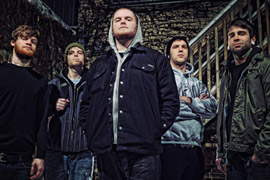