Eric Hersemann the guitarist and founding member of the psychedelic extreme metal act, Gigan spoke with me about the bands newest release, Quasi-Hallucinogenic Sonic Landscapes. The band fittingly takes their name from one of Godzilla’s most formidable opponents; a buzz saw wielding cyborg monster. I say fittingly because this is a super aggressive brutal disc that really wields its own buzz saw of sorts. Here is what Hersemann had to say about the band, their new record and when we can expect to see them on the road.

The name of the band, Gigan, is interesting to say the least and sounds as if there is a story behind it. Where did the name come from and what is the story?
Eric: Gigan is a Japanese word meaning “false eye”. It is a direct reference to the human ability to see with our mind. Gigan is dedicated to imagination and self-expression so I believe the name fits perfectly!

Now that your new CD, Quasi-Hallucinogenic Sonic Landscapes is complete how do you feel about it? Are you satisfied with the outcome?
Eric: There are always things that can be improved, but I am very happy with the outcome this time around! We returned to Sanford Parker and Volume Studios in Chicago and once again, he did a killer job! We went for a classic sound with modern overtones and I think we achieved our goal. I don’t want things over-produced but what is the point of complex music if you can’t tell what is going on? We try to get a good mix of old and new.

What was the writing process like for this CD.? Did you guys all write together? How long did it take?
Eric: I wrote the entire record including lyrics, myself with Kaish doing his best to transcribe my drum ideas to playable music. Some songs are older than others but most were written in 2010. Mostly, music is written first with lyrics coming next but before all that I imagine a cool concept!

Give us some insight into the record and the meaning behind its title?
Eric: The album title is my attempt at describing all the songs on the album at once. I wanted people to know what they were getting into when checking out the record. Plus, I love the word “Quasi” This album is definitely the definitive Gigan release up to this point in time.

The dizzying level of technicality in the music is definitely something that sets you apart from the majority of your peers. Is this technicality going to be difficult to reproduce in a live setting?
Eric: Thanks for the compliment! All members of Gigan work hard to hone the talents on their respective instruments! Gigan is first and foremost a live band. It may be difficult at times but we play the songs the way you hear them! There is always some live improvisation and sometimes sound difficulties but Gigan is all about giving people the best live performance we can! High energy, visuals, movement…no statues allowed!

Are there any tracks on this disc that are personal favorites or that have good stories behind them?
Eric: Track 1 is called “Mountains Perched Like Beasts Awaiting The Attack” and that is a personal favorite of mine. The concept behind that song is based on the thought that maybe what we call ‘mountains’ are actually sentient beings lying dormant or frozen amongst our landscapes. Maybe those same beings absorb our psychic energies? Anyway, what if all of the human races negative energy was strong enough to re-animate these beings with a sense of purpose? That is what the song is about.

What kind of touring plans do you have in support of the record?
Eric: We plan on doing many tours in support of Quasi-…. The first of which will be with Swedish Death Metal vets Grave! Also on the tour are Blood Red Throne and Pathology. The tour starts in August and goes through the U.S. and Canada until September 22nd! After that we have much more stuff cooking!

Any closing words?
Eric: Thanks so much for your support!!! Make sure to check out Quasi-Hallucinogenic Sonic Landscapes and come see us at a gig or ten! Thrash in space! 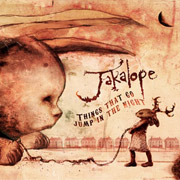 Jakalope – “Things That Go Jump In The Night”