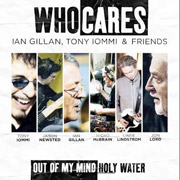 After more than 25 years Ian Gillan and Tony Iommi have teamed up once again, this time, to raise funds for the rebuilding of a music school in Gyumri, Armenia that was destroyed in the 1988 earthquake. Joining these two legendary musicians on the disc are none other than Jon Lord (Deep Purple), Nicko McBrain (Iron Maiden), Jason Newsted (ex-Metallica) and Mikko Lindström (HIM). As you might expect from musicians of this caliber, the two song disc is absolutely phenomenal.

The first tune, “Out Of My Mind,” is a slow burning heavy Sabbath-esque sort of tune that is super catchy and begs to be played repeatedly. The second tune on the disc, “Holy Water,” is heavy as well but also incorporates a duduk, (a traditional Armenian woodwind instrument) and the effect is striking. Mixed in with Iommi’s crunchy guitars and blazing solos this song takes on an almost world music feel.

The disc also includes a video for “Out Of My Mind” and a short documentary/interview with Ian Gillan explaining the project and his interest in the Armenian people and the music school in Gyumri.

Check out the song: “Out Of My Mind”