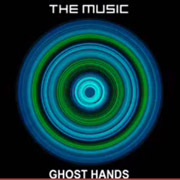 With farewell gigs announced, The Music also decided to release one final single before departing the musical landscape. “Ghost Hands” was a song written for the band’s fourth studio album, which was never completed. However, lead singer Robert Harvey announced that the band “love the track and it just seemed a shame to leave it gathering dust for ever. It’s good to go out with something positive and new and we think it deserves to see the light of day.”

And thank goodness the band decided to give away this final song, for it is an utter masterpiece. It begins with a very eighties drum beat and a very New Order-esq bass riff. The electric guitar trickles in, with a reverbing effect that U2’s ‘Edge’ would be very fond of. Harvey’s echoing verse follows and builds up to a mesmerising chorus passionately preaching “we get up, we get up, we make history.”

The one criticism, would be that the “remix”, or “extended version” is actually slightly better. Nevertheless, “Ghost Hands” is a truly epic way for a band to bow out with and the best thing about it, is that it is available for free off their website.

Check out the song: “Ghost Hands”