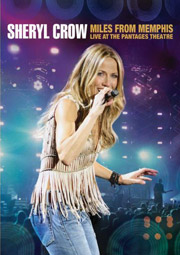 Filmed in California in November of 2010, the majority of the tunes on this DVD come from the soulful, R&B flavored, stripped down disc, 100 Miles From Memphis. Joining Crow onstage for this performance at the Pantages Theatre in Hollywood, and providing the backbone for her set, is a group of unbelievably tight musicians that call themselves The Thieves. While Crow is definitely the star of the show these guys, even though quite unassuming, really play their tails off.

Crow looks and sounds incredible as she works through some of her lesser known tunes from her last disc, 100 Miles From Memphis. She also digs deep into her catalog to pull out some crowd pleasing favorites such as, “My Favorite Mistake,” “If It Makes You Happy,” and “Soak Up The Sun,” all of which are performed to perfection and even take on a bit of a life of their own with some improvisations by Crow and the band.

Crow, looking very relaxed, banters and jokes with the crowd on numerous occasions throughout the performance creating a vibe that is extremely intimate and personal. Really I think the casual vibe makes all the difference in the world; it feel as though this is just a bunch of friends and musicians who have gotten together for a large jam session. The picture quality and sound are phenomenal and I enjoyed the bonus rehearsal footage as well.

At the end of the day, this is really an enjoyable disc that should not only please fans of Sheryl Crow but fans of good solid musicianship as well.

Check out the song: “I Shall Believe”