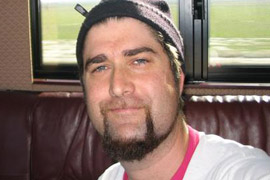 Producer, songwriter and musician Jim Greer spoke with me recently about his newest release, Ginger Vision. For many years now Greer has been part of the producer/artist team known as The Rondo Brothers and has lent his talent to a many different projects (he’s been involved with over 70 records to date). He was the lead writer of Galactic’s “Heart of Steel”, sung by Irma Thomas and listed by NY Times’ as one of the “Top Ten Songs of 2010”. Other notable projects to which he’s contributed include: Yoko Ono, Tipsy, Dr. Octagon, Cyndi Harvell, Foster The People, Samantha Stollenwerck, Stanton Moore, The Houseman, MC Lars, Eric Lindell, Loquat, Vinyl and New York Dolls. Here’s what Greer had to say about his new release, Ginger Vision.

Now that your brand new CD, Ginger Vision, is complete how do you feel about it? Are you satisfied with the outcome?
Jim: Yes. I kept revisiting it and wondering what I should do to improve it and nothing would ever occur to me. I probably listened to it in my car about 100 times before deciding I could let it go. And, I played it for a few key people who said it was great. At that point I figured it was time to stop thinking about it. But yeah I think I’m satisfied with it. It’s just ten songs, and they are what they are. When you’re a songwriter you sort of write a lot of songs, the ones that keep coming back make it to albums, and there’s nothing you can do once it gets out in the world. But I wouldn’t change a thing at this point. How I feel about it is mostly that’s it’s totally real and was made as a singular thing and has nothing to do with anything. I love that.

Give us some insight into the record and the meaning behind its title?
Jim: The phrase ginger vision alludes to a sort of way of looking at things. It’s another way of sort of saying “rose colored glasses” in a way, although while that’s something where people are fooling themselves and this isn’t quite like that. This is more like trying to always see the good in everything. Having a “ginger vision” – ginger in the sense of gentle or caring or tender. And to be honest I’ve felt pretty beat up by a lot of things that have happened to me in my years on earth. And while parts of me want to rage about it, what always feels best is to try to see things positively. Really in a way this album isn’t saying I’ve accomplished this, it’s me trying to learn how to do that better. One thing I know is that when I channel emotions into songs it’s very honest. Me or my songs seem to have nothing to do with the music world, or the world at large. I may as well be making records on Mars. But I can’t seem to do anything but what I do, what comes out naturally. And with all that is happening I feel like if I don’t maintain a “ginger vision”, I’ll go crazy.

Give us some insight into the album lyrically. This is an intensely emotional record.
Jim: I suppose so. For me the lyrics are amazing and perfect in terms of my own abilities. But nobody ever gets my lyrics even though they are plain as day to me. So I have long since stopped editing myself or trying to communicate better. Actually I feel like the lyrics on this record are utterly straightforward. In the song “Pixie Dust”, the chorus says “I will love you like no other”. That’s not really rocket science. Other songs just kinda say something that to me is kinda basic… my favorite lyrics might be “I’ve got to tell you a story about my life, I came to California and found myself a wife, she told me I was crazy, I said I wasn’t lazy, look what a mess I’ve made of my life”, That’s funny to me, like I could see it in a movie with George Clooney or something.

Another one I like is “what station will we spin, heartbreak we tune it in, and you’re breaking up again”. Kind of mixing up the idea of breaking up in a relationship with a radio station breaking up and being hard to hear. I also like “Sunshine ON.” “I’m looking over clouds hanging over my head”. I think when I write songs I’m sitting there trying to figure out how I feel, and why I would want to express this feeling through music, or why it needs to be so. I’m not very good at thinking about what would be entertaining to people. But most of the songs I like a lot are kind of a combination of these efforts.

What can fans expect when they pick up a copy of Ginger Vision?
Jim: Man, that’s a tough question. I mean I really like Sean Lennon’s music. What do I expect when I buy his album? I expect to hear a guy writing songs and being honest and I don’t give a fuck if it’s any particular style at all. I just want to hear what he’s got to say this time around. So I think people can expect just a collection of songs from a guy from Ohio who has crafted a crazy topsy turvy life as a music producer as well as a human. And along the way I’ve worked with some really cool people, played with some great musicians. You know all I think I really want, that I don’t already have, is to reach out to all the guys or kids out there who are like me. They are out there fumbling around like I was, and if they needed any help, I could probably help them.

Any touring plans in the works?
Jim: No, not really. I may play some bay area shows, but it’s no priority at the moment. It would be more likely I would go on tour with other bands I work with.

What artists would fans be surprised to find on your iPod?
Jim: My iTunes is full of amazing variety. I have some of everything. I love guilty pleasures like random super cheesy songs by Olivia Newton John and I have all sorts of great obscure hipster bands and remixes and dance music. I keep up pretty voraciously with what’s happening in music and if I like something at all I’ll buy it. I love how with the internet you can read about someone classic that you’ve never really listened to, like Lee Hazelwood or the Everly Brothers or whatever, and instantly have some of it.

I have a problem which is that I can get to liking almost anything if I get into it. I think people would be more surprised at what I don’t have. I never need to listen to a lot of music again because I’ve heard it so many times already. So I don’t have much Zeppelin or Hendrix or Stones or any of the stuff that’s so ubiquitous. I like all that music just fine, but I’m totally sick of it. I’m also pretty down with all the mainstream-y grunge from the 90’s. Totally bored of Nirvana and Radiohead and all those same old, tired bands. It’s great to discover them if you haven’t heard it before, but I like to hear new things that having nothing to do with the past in any way.

And I love when artists take huge risks. One of my favorite newer bands is Destroyer, who just does something different every record, and I think that’s cool. My favorite way to listen to music really is on shuffle. So in my kitchen I have a laptop with about 50 GB of music and I just hit shuffle. So I’ll get cartoon music from Bugs Bunny, then like a rad Elvis gospel song, then like a Velvet Underground B-side, then some random flaming lips song, then the Bee Gees, and so on. That’s fun for me, and when something comes on I don’t like, I just skip it!

Tell me about a book or two that you’ve read that you think other people should read?
Jim: Just read “True Grit.” Amazing. Everyone should read that and it takes like 30 minutes. I just read some Roald Dahl stories from a book called “Switch Bitch” that’s really funny and great. I recently discovered Margaret Atwood – a book called “Blind Assassin” and another one, “Handmaiden’s Tale.” Both incredible. I also love Philip K Dick and have like 30 of his books in a row.

If you had not become a musician what other career path would you have liked to attempt?
Jim: I was so set on music for so long that that’s a hard one. I never wanted to do anything else. Honestly I think the best job for me would be to a manager of some sort because I’m good at directing people, being kind of in charge, and feeling like I’m needed and/or can contribute, which is why I like producing. If I had to manage something though, I would want it to be outside, like a carnival or a farm or something fun where your day is filled with different activities, and you’re walking around a lot sort of making sure stuff is getting done right. I absolutely hate doing the same thing over and over.

What three words best describe your band?
Jim: I don’t really have a band. For so many years I played with Tim Carter on drums, and it was just the two of us. That would be just piano and drums, and it’s awesome. One word, awesome.

If you were a superhero, who would it be and why?
Jim: Hmmmmm… Silver Surfer, so I could explore the universe freely.

What is next for Jim Greer?
Jim: Currently working on an album with Sarah Lee & Johnny, who are really cool. Working with bay area artists Kid Beyond and Loquat. Working on some commercial type jobs as well.

I understand that the proceeds of this record will go toward offsetting the medical bills you are faced with in regards to your son’s treatment. Is there somewhere people can learn more about how to help?
Jim: Not really. My website and Facebook are enough. I want the music to speak for itself. The little bits of money I can generate will help us. We’ve had to spend about 10K on this medical care so far which isn’t so bad in terms of how much it can cost, but for a musician it’s a lot. I have a simple little goal of selling 1,000 CDs and making that 10K back, and maybe spreading around some songs I care about.