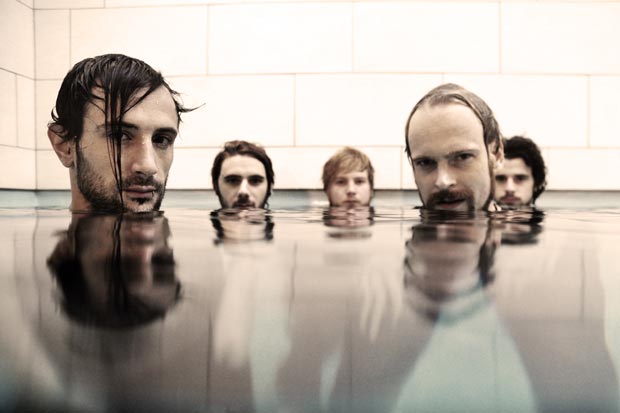 The Ocean are, in my opinion, one of the best progressive metal bands ever. This said, I was stoked when I recently got the chance to sit down with drummer Luc Hess during the band’s stop in Toronto. We chatted in brief about the band and how things are for them in this part of the world.

So you’re a week into this tour, how’s it going so far?
Luc: [laughs] If we only regard shows and crowd and everything, it’s been great and it’s been a great week. Touring with those guys in Between The Buried And Me is just awesome. They just drove so many kids wild every night so we are always playing in packed venues and they are always really good shows. Then, as I just told you, we have the problem with the bus company, this guy trying to screw us up. We are in our rights but he is trying to get more money from us.

Well we better hope a lot of kids buy merch from you guys to help you guys.
Luc: [laughs] Yes, hopefully.

So last year you guys released two albums Anthropocentric and Heliocentric. How has the reception been in North America from these albums?
Luc: I’m not the one really in charge in taking care of all the record sales and stuff like that, but so far, from what I’ve heard, and what I know, it’s been pretty good. Heliocentric did really good and Anthropocentric is kind of doing good too and I think with this tour we are getting more and more fans. We can see at our merch table, our merch guy Martin is always coming back saying “Yeah, there’s all these people coming saying they never heard about you guys until tonight”. So I guess North America is one of the places we sell.

So you guys are growing in North America?
Luc: Definitely, yes.

Where did you get the names of your two albums?
Luc: That’s definitely a tough one. It’s basically, Robin is really into these concept things; Heliocentric is about all these heliocentric parts. I have a hard time saying this even in my mother tongue. It’s a critical thing especially regarding the Christian religion, not a judgement or nothing bad. It’s a critical view of all these ways of life with religion, for I don’t know how many years. I am not the best to talk about that and afraid to say too much because I do not want to tell things that are not what they are. I’m really a musician, Robin is the head but too bad he is busy right now.

How come you didn’t try putting the albums together like what was done with Precambrian?
Luc: It was basically everything written from Fogdiver to Precambrian was written by Robin. When we all joined the band between 2007 to 2009 we wanted to get involved in the process of song writing. So Jona wrote like five or six songs on Anthropocentric, Louis wrote one song too. At first it was to be one album, but it was sounding way different somehow. It was clearly a difference, since Robin used to write all the music before it was quite a difference. We decided to release two albums first since it was an original concept to release two albums in a year and they didn’t fit together very well. After recording most of the songs we just wrote about two to three to be Anthropocentric and that’s pretty much it.

On the past albums The Ocean has done, they had like 50 musicians on the album. How come with these two records you decided to just do it with five guys?
Luc: On these two records there are guests too. All the samples we are playing were actually played by classical players, piano players, everything so it still works as a collective. The core of the band is the five of us now and the people who have been involved with The Ocean for longer or short term. At some point they had to quit because of families or didn’t have time to do this and that. And we were like four guys from a totally lust town in Switzerland and all we wanted was to get more involved and touring and stuff like that. I guess Robin found in us like a team that he can trust in and gets really involved into the project and it just happened.

So it stayed as you five and then a few guests here and there?
Luc: It’s still a part of The Ocean to have classical players on records and such and it’s always gonna be I guess. I just want to add that we played a few shows in Europe and I don’t think we will be able to play these kinds of shows in the U.S. It’s quite hard for us to come here. We play a few shows in Europe with actual chords choir and pianos live on stage.

You guys should release a DVD of that.
Luc: We shot a DVD actually, we got some material already. We brought some photographers with us and the people to collect the most we can of material for a DVD.

So what’s happening with you guys after this tour?
Luc: We fly back to the UK; in London and we’re on a tour for five days I think with three other UK bands. So the headliners will be Earthtone 9 and we are direct support for this band and Maybeshewill and Humanfly who are both awesome bands too and I’m really looking forward to this tour too. Then we’ve got three headlining shows in the UK I think, Scotland and some place like this. Then we go back to mainland Europe for about a three week tour with two bands from the U.S. Intronaut and Red Fang and another project from Robin Earthship. That’s going to be interesting cause I’m going to be playing with them on this tour too so Robin and I are going to play twice every night.

So you’re playing for Earthship?
Luc: Just for this tour. The drummer couldn’t do it. It’s going to be fun!