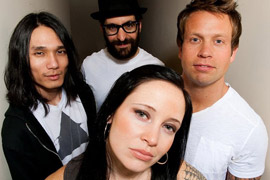 Die Pretty are a pop-punk band from New York that are ready to take over the world with their catchy tunes. I recently got the chance to ask lead vocalist and bassist Sarah Orloff a few questions about their history and her acting job in their music video “Medicated Nation”. Here’s how the conversation went.

Tell me the history of the band and how it took form.
Sarah: My brother, Skip, and I had always grown up playing and singing together. We have been in bands together our whole lives. Die Pretty came from and ending of a previous band and a lineup change. We teamed up with Tommy and Angelo after we met them at a coffee shop. Then we started jamming and haven’t stopped since.

Where did the name Die Pretty come from?
Sarah: “Die Pretty” is a lyric from a Bad Religion song. This was one of our favourite bands growing up. It is a play on words. Aggressive Rock with a Pop sound.

You have just released your new EP Battle Over Brooklyn, where did the title for this release come from?
Sarah: Brooklyn is such a brand now. There is a huge music scene and so many bands popping up every day. Its almost like now it’s a fight to be heard. We don’t think of music as competition, but we wanted to show everyone that we will do whatever it takes to get our music and our message out there.

You have some very catchy vocal lines in your songs. What topics do you write about?
Sarah: We sing about a lot of things. Everyday issues in our own lives to made up stories and events. We always write lyrics after the music mostly. So the mood of the music usually sets the tone for our lyrics.

Is Battle Over Brooklyn a digital only release?
Sarah: Currently it’s a global digital release through InGrooves/Bigtime Entertainment. But if you think about it, where can you go nowadays to buy a record? [laughs] Mostly everything is digital.

Recently you put out a music video for “Medicated Nation” online. What’s this song about exactly?
Sarah: The lyrics are about two characters dealing with different addictions and personal struggles. The story is an example of how a lot people in society have personal addictions and need a “fix” (in this case medication) or something to get by every day. The girl in the story is addicted to medication to avoid suicide and the guy in the story is addicted to violence and rage. They both need the pills shown in the video to try and cope with their personal struggles. But the story ends in failure. Both characters cannot win and their addictions take over.

Check out the song: “Voices”

So I see you do a bit of acting as the medicated girl in the shower. Were you also the girl who gets with the medicated guy?
Sarah: Haha, yes I did some acting for this one. The shower scene was very fun putting together. And no that’s an actress, Ketevan Gigi, playing the girl who seduces guy. The other character in the video is played by Skip, my brother and our guitar player.

I didn’t see this song on Bittersweet or Battle Over Brooklyn. Is this song going to be on your next album; and does this mean you currently working on a follow up to Battle Over Brooklyn?
Sarah: We have a 2010 release titled Die Pretty which is out on iTunes and Amazon etc… This track was on that EP. The EP is on iTunes, Amazon etc…Bittersweet was released only in Europe. We have a lot of material that has not been officially released but is available online.

So when you’re not rocking out with Die Pretty what do you do with your off time?
Sarah: In my spare time I do tattoo modeling. I have worked with Inked magazine and other companies. Most recently I am “Miss November” in the 2011 Sailor Jerry Pinup Calendar. Check it out!

You are pretty tatted up I see, (I don’t even come close to how many you have) how many do you have?
Sarah: Too many to count! 🙂

What’s next for Die Pretty?
Sarah: We are trying to get our new EP Battle Over Brooklyn to as many ears and listeners as possible. We have a big show on June 17 at Gramercy Theatre in NYC.