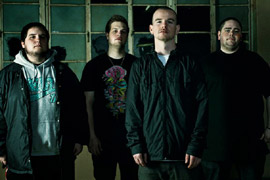 Betrayal is a metallic hardcore outfit that really packs a punch. With the release of the band’s latest disc, Abandonment, they are proving that they are a force to be reckoned with. Vocalist, Brendan Foley & guitarist, Sean Chamilian spoke with me about the band, their new disc and their plans for the remainder of the year.

Now that your new CD, Abandonment, is complete how do you feel about it? Are you satisfied with the outcome?
Brendan: I think we all feel more relieved than anything else. Recording this album became such a long process that to have it finished and actually hold copies of the album is huge for us. We all couldn’t be more stoked on how it came out and the initial response we’ve been getting back from our fans about it.

What was the writing process like for Abandonment? Did you guys all write together or was it more the efforts of one member of the band?
Sean: For the most part, I wrote riffs for the album at my house and programmed drums for it. Then I sent it to everyone in the band. We all got together before we hit the studio and put the songs together with ideas that everyone had.

How does it make you feel when the emotion and power that you envisioned in the recording studio, come to life while playing in front of a crowd?
Sean: It’s honestly the most unreal feeling ever. Being able to express music that you’ve created to a live audience is the most liberating feeling, especially when the crowd is reacting and singing along. It’s honestly what drives this band forward.

What is it that gives you inspiration when writing and is there a theme running through Abandonment?
Brendan: For lyrics I will usually just get an idea for a line or two and write them down in my phone really quick. From there I just try to let as many ideas form as possible until I feel like I got every thought in my head out about whatever it is I’m writing about. I try not to think too much about themes and focus more so just on clearing my head when dealing with separate songs. My goal for this album was to have each song deal with different emotions people go through and deal with every day when starting on a new path and dealing with the consequences of leaving one life behind to start a new one.

Give us some insight into the record and the meaning behind its title?
Brendan: For the record as a whole though I chose the title Abandonment because myself and the rest of the members of Betrayal are going through a change from being students and kids to a full time touring band. In a sense we’re all abandoning our old lives for something new and with that comes abandoning friends, family, jobs, hobbies and everything that comes with having a normal life. I wanted to try to capture all the different sides of going through a transition like this from the points where you feel like no one in the world understands how you feel to when you feel like no one in the world can stop you no matter what you do.

Are there any tracks on the record that are personal favourites or that have good stories behind them?
Sean: My personal favourite is “The Good Die Young”. It’s one of the fastest songs we’ve ever had and has group singing, which is definitely a new thing for us. I can’t wait to start playing this one live.

What kind of touring plans do you have in support of the record?
Sean: We start a tour with a few bands called Molotov Solution, Legend, & The World We Knew in a few weeks which hits most of the US for about 3 weeks. I know our whole summer is pretty much booked solid. I can’t reveal any specifics but we’ll be hitting some places we’ve never “ventured” to yet; keep your eyes peeled!

All of that passion that you play with must be tough on you physically. How do you prepare for the physical demands of a tour?
Brendan: There’s no real way to prepare for tour exactly. We try to sleep as much as possible when were home and eat decently before its back to limited sleep and fast food. Other than that we’ll stretch a little before and after shows but try to feed off adrenaline as much as possible.

What artists would fans be surprised to find on your iPod?
Sean: Well I may or may not be Ke$ha’s #1 fan so you can find both of her albums on my iPod. I really just love older female pop acts like Pink, Destiny’s Child, Dream, La Roux, Katy Perry, Lady Gaga, ect.

Tell me about a book or two that you’ve read that you think other people should read?
Brendan: You should all read JD Salinger’s “Catcher in the Rye” just because that book is awesome and almost has the same theme as our new album and I think Andrew will say “The Art of War.”

If you had not become a musician what other career path would you have liked to attempt?
Brendan: If I wasn’t touring in Betrayal I’d still be in college right now working for a Political Science degree. So I guess, President?

If you were a superhero, who would it be and why?
Sean: I’d say I would be one of the Teenage Mutant Ninja Turtles. I’m really not sure why, but they’re just pretty bad ass and eat a bunch of pizza. Sounds like a good super hero to me.