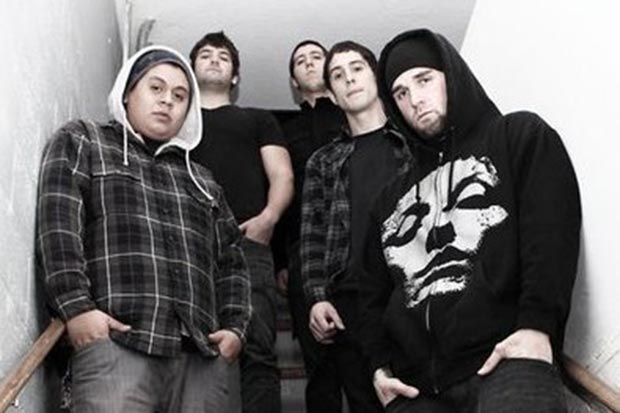 I recently spoke with vocalist Corey Bennett of the California based metal/hardcore band, Bermuda. The band has just released their latest disc, Isolationists and they are currently out on the road in support of it. This is a heavy, brutal tour de force of a record and fans of the extreme genre will truly dig it. Here is how the conversation with Bennett went.

Now that your new CD, Isolationists, is complete how do you feel about it? Are you satisfied with the outcome?
Corey: I couldn’t be happier with the end product; we achieved what we sought out to do, create a brutally heavy, crooning, real E.P.

What was the writing process like for Isolationists? Did you guys all write together or was it more the efforts of one member of the band?
Corey:How does it make you feel when the emotion and power that you envisioned in the recording studio, come to life while playing in front of a crowd?
Corey: It is the greatest feeling in the world, to see people throw themselves entirely into something that we created, and to meet them all and hear their stories…Greatest feeling on earth.

What is it that gives you inspiration when writing and is there a theme running through Isolationist?
Corey: I write lyrics based on life, I feel music should be personal, and the lyrics on the E.P. are very personal to me. I was going through very hard times, and was fighting to find anything to believe in…And I eventually did…Myself. And by doing so I realized that I wasn’t alone in this, there a millions of other people going through the same or worse.

Give us some insight into the record and the meaning behind its title?
Corey: It’s all about realizing you aren’t alone in this life. The title sort of symbolizes it, how one is pasty of many. The lost, the angry, the unloved, the broken, and the beaten down…Are all part of something larger, if they all stand together, the earth would shake under their weight.

Are there any tracks on the record that are personal favorites or that have good stories behind them?
Corey: They all have good stories, but I feel the fondest of “Beggar, The Bitter Reign”…It came together so fast, the guys showed me the song late sat night after a great show and I was so inspired that I stayed up all night writing the lyrics and patterns. Even watching Gus (volumes) do his guest part was amazing, he came in, I gave him a brief explanation of the songs theme, and he freestyles the lyrics and patterns. It’s even dick doing it live if Gus is around because the guys got so much energy.

What kind of touring plans do you have in support of the record?
Corey: As far as I know, we’ll be on tour till the end of summer then go in to record our full length.

All of that passion that you play with must be tough on you physically. How do you prepare for the physical demands of a tour?
Corey: Though it may not look like it, I’m a fitness Damascus and gym rat when off tour, so is our bassist Andy. When possible, he and I find gyms on tour and make use of them. Otherwise I just try to avoid fast food and alcohol. It I’d extremely physically demanding every night, but if I don’t walk offstage drenched, drained and feeling Luke I’m going to black out…Then I know I failed.

What artists would fans be surprised to find on your iPod?
Corey: Probably Jonny Cash, or P.O. S. and Doomtree (I love old country and meaningful hip hop)

Tell me about a book or two that you’ve read that you think other people should read?
Corey: Yes, both are by Chuck Palahniuk (author of “Fight Club”) the first being “Lullaby”, the plot of the book is farfetched and very dark but original, and the second being “Rant” which is also dark. It deals with a modern day plague or zombies and the only remotely practical way they could exist, and worm holes.

If you had not become a musician what other career path would you have liked to attempt?
Corey: I’m actually going to be entering personal training and starting tattoo training soon.

If you were a superhero, who would it be and why?
Corey: Since I’m a former comic geek…I’ll say…I’ll say Wolverine…He’s got no past, he can’t die, he’ll cut you to ribbons and he’s the best there is at what he does, and what he does ain’t very nice.