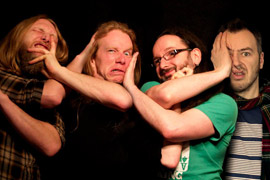 London’s kings of bizarre and explosive rock, End Of Level Boss, will attack audiences in the Americas with their long-awaited new album this Summer. Set for official North American release on July 26th, once again via Exile On Mainstream Records – who released End Of Level Boss’s debut full-length ‘Prologue’ (2005) and follow-up ‘Inside The Indifference Engine’ (2007) – the band’s trademark sound is magnified with even more free-flow surprises on the new ten-track album, ‘Eklectric’.

Introducing an entirely new rhythm section since their last release, the band’s flurry of angular, post-punk angst goes head-to-head with an almost progressive, technical attack on ‘Eklectric’, the album surging with nearly 54 minutes of boundary-free relentless rock, magically set to tape in a mere four days early this past Winter. Once described as “Kyuss meets King Crimson,” End Of Level Boss have taken that recipe and dragged it, kicking and screaming, into an all new direction, the new album capturing the live energy and more punk attitude of the band, with elements of Motorhead and Voivod smashing their way through the surface.

The fine folk who power The Obelisk have graciously offered to host a new track from ‘Eklectric’, and we accepted. Let the mangled riffage of “Thee Absurd” molest your mind HERE.