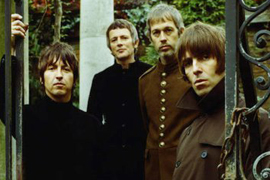 BEADY EYE Head to the States for an Exclusive Tour

Beady Eye head to the states this week for their first North American tour dates. The band (Liam Gallagher, Gem Archer, Andy Bell and Chris Sharrock) will be giving fans a first live taste of their debut album, ‘Different Gear’, Still Speeding in a series of concerts beginning in Chicago on June 18th, followed by Toronto on June 20th, New York on June 23rd and Philadelphia on June 25th.

Beady Eye will make their U.S. television debut on the Late Show With David Letterman on June 22nd. On the same day, the band will be a part of CBS Interactive Music Group’s “Live On Letterman” webcast series presented by AT&T at 8:00pm ET/5:00pm PT. “Live On Letterman” webcast concerts will follow the taping of the band’s appearance on the Late Show With David Letterman, which will be broadcast the evening of the webcasts (11:35 PM-12:37 AM, ET/PT) on the CBS Television Network. Live On Letterman and CBS Interactive Music Group webcasts are broadcast worldwide HERE.

You can view below to see Beady Eye (and separately, eager fans as they wait to get into the venue) perform “The Roller” off their new album and live for the first time ever at Glasgow’s Barrowlands on March 3, 2011.