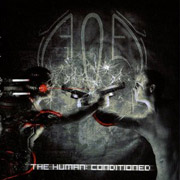 Ashes Of Eden – “The Human: Conditioned”

With bands such as Beneath The Massacre, Blackguard, The Agonist, Cryptopsy and of course Ashes Of Eden, Quebec, Canada has come to be known for their supreme and growing metal scene. Speaking of Ashes Of Eden, while not the best, the band’s debut release, The Human: Conditioned, has helped to put them on the map and is yet another reason why Quebec is gaining the reputation of being a true metal breeding ground.

With their debut effort the band demonstrates some true metal; as soon as you press play you’ll hear some heavy metal guitar riffs followed by a shrill scream. While Ashes Of Eden do thrash throughout all 7 of the disc’s tracks, the music is a bit repetitive and has been done before. Even though their sound is intense, thanks in large to Mike Rochford’s aggressive growls and screams, his singing during the choruses is on the weak side.

Negatives aside, these French Canadians have successfully created a relatively good first offering. People looking for a dose of new, underground Canadian metal should take some time to check out AOE’s debut album, The Human: Conditioned. It’s pretty good and may lead to better things.

Check out the song: “Cerebral War”