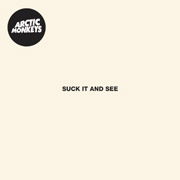 Arctic Monkeys – “Suck It And See”

Arctic Monkeys have come a long way since their debut album Whatever People Say I Am, That’s What I’m Not. Lead singer Alex Turner no longer chats into the microphone, as he recently put it, about “fucking taxi ranks” and actually sings now. Jamie Cook’s guitar playing and the stick work of Matt Helders is now less frantic and far superior in quality. Nick O’Malley’s bass has changed to a thicker tone than before, supporting a rougher and slightly psychedelic sound that the band now possess. Although Arctic Monkeys have long lost their mainstream lad-rock status, it is obvious they are now a far more developed band.

Suck It And See is rather aptly named as it is a grows on you with every spin. Sometimes Turner does overdo his lyrics and indeed, a few songs are filler, but there are some real top quality moments which remind us that Arctic Monkeys are still the best British band around, both musically and lyrically. Many music critics have claimed that Turner and co. still have their best to come and there are prolonged periods on Suck It And See which suggest that they may just be right.

Check out the song: “Don’t Sit Down ‘Cause I’ve Moved Your Chair”