Episode Summary: Hosts Alloy Matt and Alloy Ben hang out in the studio and chat about new releases that just came out, or are soon to be released. Matt is a shameless self-promoter and plugs his blog (link below) and the Alloy Boys talk about some upcoming shows they’re hitting up. Same shit, different day! Later in the show, an interview Alloy Matt did with No Bragging Rights at the Wasteland in Salem, OR is featured. Had a blast hanging out with those dudes! 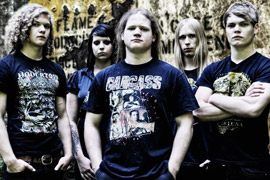