Jason Dunn the guitarist and mandolin player with the Canadian Celtic/folk rock band The Dunn Boys spoke to me recently about the band’s new release Volume 1. The disc starts out with an intro that’s reminiscent of an Irish Pub sing-along, complete with mandolin. This is fun energetic music and I was sold right from the get go. The catchy gang vocals and choruses really got under my skin and made me want to pump my fist in the air with reckless abandon. Here’s what Dunn had to say about the band and their new disc, Volume 1.

Now that your new CD, Volume 1, is complete how do you feel about it? Are you satisfied with the outcome?
Jason: We are very satisfied with the outcome of the record. As a musician and writer, it’s often scary to rely on the producer’s ear to make your song what it has become in the final stages. Our producers on this record, Mark Drury and Jonathan Steingard did a heck of a job!

What was the writing process like for this CD? Did you guys all write together? How long did it take?
Jason: I wrote most of these songs solely within the last 2 years. There are a couple (Nova Scotia & Norland) that have been in the family for about 20 years.

What can fans expect when they pick up a copy of the disc?
Jason: It’s a fun record. There’s a good mix of upbeat songs, as well as mid-tempo’s and ballads. It’s got a somewhat of a traditional feel throughout its entirety, and has been compared to The Pogues.

Are there any tracks on the disc that are personal favorites or that have good stories behind them?
Jason: My favourite track on Volume 1 is “Brian Moore.” It’s fun to play live too! “Nova Scotia” was a song that was written almost 20 years ago about a minnow, we named Moe, we scooped up while at a cottage in Northern Ontario (Norland, to be precise). The original lyrics in the chorus was M-O-E spells Moe the minnow! The lyric change took place a couple years ago.

When you began to put this album together were you concerned at all about commercial success?
Jason Not really. Obviously we hope a record does well. The reality is, when you’re an independent band, you don’t always have the tools to make that happen, at least in a way you would picture it. I think at the end of the day, as long as you’re making music you love to make, it doesn’t really matter! Have fun with what you do!

How is the current economic slump affecting your band?
Jason: 10, even 5 years ago, bands could make a living off of record sales. That’s unheard of in today’s day in age. Since then, touring has been most bands only source of income. Bands like us are constantly trying to find new ways to re-invent ourselves, which can be stressful at times, but also keeps it somewhat exciting!

What kind of touring plans do you have in support of the record?
Jason: We’re hitting the road this summer, playing some summer festivals and pub dates, which we’re really excited about!

What artists would fans be surprised to find on your iPod?
Jason: Well I have a pretty serious collection of albums on my iPod. Probably the most obscure thing on my iPod is Mew. Although it’s on my iPod, I’m pretty sure I’ve never listened to it the whole way through!

Tell me about a book or two that you’ve read that you think other people should read?
Jason: I’m pretty old-school. I was a big fan of Jack London growing up and have continued to read his work. “The Sea Wolf” is one of my all-time favourite books.

If you had not become a musician what other career path would you have liked to attempt?
Jason: It was my dream to be a professional hockey player. This isn’t a bad plan B though.

If you were a superhero, who would it be and why?
Jason: Superman. First of all, he kicks ass and secondly, Lois Lane is a babe.

Any closing words?
Jason: For every physical copy of Volume 1 that is sold, $1 is being donated to the Canadian Diabetes Association, to help find a cure! Long story short, I was diagnosed with Juvenile diabetes when I was 12 years old and CDA really helped me. This is just a simple way of saying thanks and return the favour! 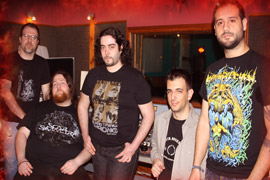