Guitarist/vocalist Kevin Childs of the pop/rock band Oliver Trolley was kind enough to answer a few questions about the bands album, Circles. This disc is chock full of unbelievably catchy, hook driven pop rock tunes that offer up a really good time. This is a solid rocking disc that is absolutely worth checking out. I would highly recommend it. This is what he had to say.

Different groups have unique ways of writing their songs. How do you guys go about writing your music? Is it a collective effort or is it more the efforts of one particular member of the band?
Kevin: On the record, Brian and I started writing by just jamming with an acoustic guitar and a keyboard. We didn’t have anyone else in the band yet. When we felt we had a few good ideas, we moved forward from there. I wrote most of the lyrics before we went in to record but I threw in some different lines and changed some things up in the studio. Now that we have a full band, I’ll usually come up with a melody and some rhythm chords and give it to Adam and Brian to spice up with some lead guitar and piano. Then we throw some drums and bass in the mix and boom! I’m stoked for these new songs!

Every band has its musical influences. What are some of the other bands and artists that have greatly influenced you guys and your music?
Kevin: For me, a few of the most influential artists are Bob Dylan, Sublime, The Beatles, and Bright Eyes. Whenever someone is like “That part sounds like the Beatles” I get really excited.

Now that your brand new CD, Circles is complete how do you feel about it? Are you satisfied with the outcome?
Kevin: I’m pretty happy with it. I can’t wait to record a full length though. We just released circles last week, so I may be getting ahead of myself.

Give us some insight into the record and the meaning behind its title?
Kevin: Well the record has a lot of different emotions and personalities. Some songs are happy, sad, mad, desperate…etc. So when it came time to name the record, Circles just seemed to sum up the emotions.

Are there any tracks on the record that are personal favourites or that have good stories behind them?
Kevin: Circles’ and ‘Way Too Fast’ are my two favourites. They’re actually about the same person, but I wrote them at different times, so I was feeling a little differently about the situation and the person.

What can fans expect when they pick up a copy of Circles?
Kevin: Good, fun songs that you can jam out too. Some more serious than others, but all are good in their own way.

Any touring plans?
Kevin: Yes!!! Nothing booked quite yet though…keep checking back!

What artists would fans be surprised to find on your iPod?
Kevin: hmmmm. Colbie Caillat? She sings me to sleep every night. Norah Jones too.

Tell me about a book or two that you’ve read that you think other people should read?
Kevin: My favourite book of all time is, “The Godfather.” I was hooked from beginning to end. I would recommend it to anyone! Seriously read it!

If you had not become a musician what other career path would you have liked to attempt?
Kevin A pilot. I plan on doing both. First I need to get over my fear of flying.

If you were a superhero, who would it be and why?
Kevin: Superman. I would like to fly. 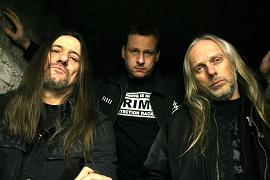