For a popular major label rock and roll band, Crossfade has certainly seen the highs and lows that the music industry has to offer. The industry can be great to some and terrible to others. It’s both rewarding and cruel at the very same time, depending on who you are or what the latest trend is. Crossfade has seen both sides over the last few years, beginning with the huge success of its debut self-titled record in 2004. The self-titled, self produced album was released on Columbia Records and from it came three top ten Mainstream Rock hits, the most prominent of all the song “Cold.” With radio hits came notoriety and big album sales with the record achieving platinum selling status, a huge accomplishment for a rock n’ roll band in this day and age.

Life was certainly good for a while, but then failure came along almost as fast and furiously as success did. Following up a debut, hit album is never easy for any band and 2006’s Falling Away failed to live up to the hype and expectations brought on by the first record. Although the songs “Invincible” and “Drown You Out” did reasonably well, album sales went way down to about 200,000 copies in the midst of a massive downturn in the music industry. Consequently, Columbia reacted negatively to the poor sales figures and Crossfade was let go.

Being cut from Columbia along with the lukewarm reception of Falling Away devastated lead singer Ed Sloan. Consumed with self-doubt, Sloan began to question his skills and ability as a songwriter. He admits that he had grown accustomed to the more privileged lifestyle enjoyed by platinum selling, major label artists but being dropped served as a major dose of reality. Fortunately enough for Sloan was the presence of guitarist Les Hall who provided Sloan with a much needed ‘kick in the ass.’ Hall essentially helped set Sloan straight by telling him to stop pouting and start writing and focusing on making a third Crossfade record. Sloan credits his good friend and bandmate with revitalizing his enthusiasm for music and helping him refocus his life in general.

Hall mainly oversaw the recording process, his first such endeavour and operated under the mandate to keep Sloan’s familiar and distinctive vocals front and center. Secondary to that was coming up with a new more collaborative approach to producing the album with more of a well-packaged song. Sloan credits cutting ties with Columbia as helping the group embark on a fresh start, especially in the recording phase as they were free of any expectations or hard deadlines. The music came together at its own pace and on the band’s own terms.

Crossfade’s new record We All Bleed is due out on June 21st on Eleven Seven Music. The band will be out for most of the summer touring and promoting the record, including some tour dates through the end of May. 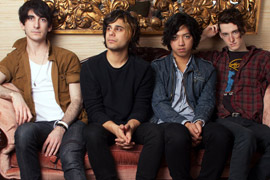 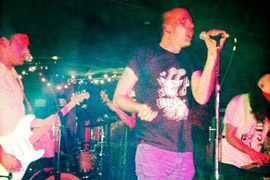