Lineup: Between The Buried And Me, Job For A Cowboy and The Ocean. After doing interviews with all three bands, I got myself positioned behind the soundboard ready to watch this amazing Metal Blade Records Tour lineup. I was excited since this would be the first time seeing one of my favourite progressive metal bands – and they were up first.

As the overhead music began a projector screen flash random images and then the musicians walked onstage. The Ocean hit the crowd like a tsunami leading off with the song “Anthropocentric”. As the song progressed, so did the fans’ involvement. The band then played some older music (“Orosirian: For The Great Blue Cold Now Reigns”) while the crowd joined in and sang along. The set was finished off with a few of the newer tracks and then the band left the stage to make way for some heavier sounds.

Job For A Cowboy took the stage and riled up the all the death metal fans. They were a muscley bunch with behemoth sized guitarists and vocalist. Not only were their looks behemoth, but also their sound – it brought doom to the fans with songs like “Knee Deep”, “Ruination” and their up-roaring track “Entombment Of A Machine” – which always makes people scream “AHHHHHHHHHHHHHHH!” A new song called “Signature For Starving Power” from the EP ‘Gloom’ (due out later in the year) was also performed.

Last, but not least was the progressive band Between The Buried And Me. The dudes came on strong, rocking their newest EP The Parallax: Hypersleep Dialogues from front to back. After showing these 3 new songs, they got right into my favourite BTBAM track, “Sun Of Nothing.” This then streamed into “Ants Of The Sky” and as the show progressed, fans sang their hearts out and air guitared to the craziness. Time has seasoned this band with an excellent performance and complex music. I can’t wait to see them again next time they’re in Toronto.

Check out the song: “Selkies: The Endless Obsession” 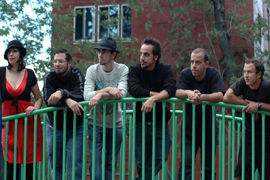