I don’t profess to be an expert on the current state of the Seattle music scene, but I would guess it’s at least a little angry and a lot raw. Surprisingly (at least to me), the Pacific North West has managed to foster and develop SweetKiss Momma, a straight ahead Southern style blues-rock band in the vein of 70’s acts like Lynard Skynard, Foghat and Nugent.

In fact, any of the tunes off of SweetKiss Momma’s most recent release, Revival Rock, could easily slide into any spot on the “Dazed and Confused” soundtrack. As another reviewer aptly observed; “this album feels like a great Saturday night out – good friends, a couple of shots of your favorite Bourbon, a few too many ice cold beers, and the pending specter of questionable choices.”

Despite the title, this isn’t a raw album, rather it has a focused and refined sound that remains consistent front to back. The band’s songwriting and musicianship keep them on track, and as a result they create catchy blues-rock tunes that will make you move. As the lyrics from the opening track, “Ready to Go”, instruct, “You(‘ll) spell my name in cursive with your hips out on the dance floor.”

Revival Rock is a good album. SweetKiss Momma won’t appeal to everyone, as they have a pretty niche sound, but if you can appreciate good song writing, fun tunes and a traditional rock sound you’ll like what they have to offer. Make sure to check out the first three tracks, as they’re standouts; “Ready to Go”, “Son of the Mountain” and “Slow Fade.”  [ END ] 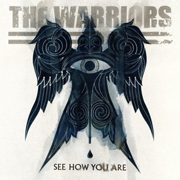 The Warriors – “See How You Are”