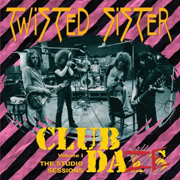 Club Daze Volume 1 contains rare or never released studio versions of original songs that Twisted Sister played while performing on the club circuit from 1978-1981, before they became household names and regular staples on MTV. Included on this disc are songs such as “Under The Blade” and “Shoot ’em Down” which were fan favorites at a Twisted Sister shows across the New York Tri-State area. Listeners will also find an early version of “Leader Of The Pack,” the song that eventually made it onto a later release, Come Out And Play.

As a longtime fan of the band I was really stoked to hear these older, rawer versions of songs that I would consider Twisted Sister classics. The remaining 11 tracks on the disc are straightforward, hook-driven rock and roll tunes that were the genesis of what would eventually become the band’s trademark sound.

Included in this package is a very well done info booklet complete with lots of early band photos as well as tidbits of information about their history and the writing process that went into these songs. I found the explanations to be incredibly interesting and the pictures of the band from the late ’70 glam scene are classic.

This disc is a must have for Twisted Sister fans and I think you will find it’s both fresh and nostalgic at the same time. For those not familiar with the band’s music, this is really a great place to jump in and familiarize yourself with them. This is pure, unadulterated rock and roll from a band that eventually went one to achieve icon status.  [ END ]

Check out the song: “We’re Not Gonna Take It”