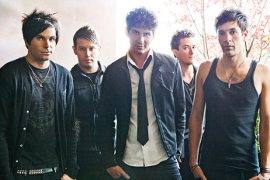 Gearing up for the release of their self-titled debut album this coming Tuesday, February 15th, Runner Runner is giving fans a first listen by premiering their long awaited music in its’ entirety on Myspace. Make sure to check out MySpace now to get your first listen of this great new record.

Runner Runner broke out last summer with their upbeat debut single “So Obvious” which charted on the Top 40 radio airplay charts. Since then, the band has released two separate videos for their second single “Hey Alli”, one of which went along with the acoustic version and the other a short film/video directed by Isaac Rentz (Cage The Elephant, Pistol Youth, Manchester Orchestra, Motion City Soundtrack), both of which can be seen on the band’s Vevo Channel.

Also, Runner Runner will join The Pretty Reckless, fronted by Taylor Momsen, on tour starting this Friday, February 11th running through the middle of March and then immediately jump on tour with A Rocket To The Moon which runs through the end of April. Make sure to visit their Official Site as we all their Facebook and Myspace pages for the latest news on the album release as well as up to date information on the tour, including ticketing links and show information.