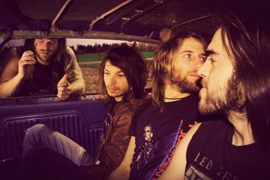 Every music information source seems to have a “Bands/Artists to Watch List” aside from PureGrainAudio. So, for the first time ever, we have decided to give you our list – more specifically, my list – of “Bands to Watch In 2011”. These are bands, in no particular order, you should check out and keep in rotation on your music player of choice over the course of this coming year and into the future, as they will be picking up speed. There’s so much to say about each of these bands, but I’ll keep it as brief as possible. Check the bands out and let me know what you think by leaving a comment!

01. Hey Sugar (Classic Rock, Hardcore, Southern Rock)
the Skinny: These dudes from Montreal, QC have successfully combined the sounds of Every Time I Die and The Tragically Hip. I don’t know how else to intrigue you, they’re rad dudes with a great sound and can easily fit in at a Blues Rock show or a Hardcore show. You can download the track “All That I Need” in PureGrainAudio’s “Audio” section; the track received over 200 downloads in the first 4 days of being posted.
links: MySpace | Facebook

02. A Primitive Evolution (Death Rock, Alternative, Rock)
the Skinny: Straight out of Toronto’s underground rock scene, this Death Rock band is sure to be hitting the airwaves and the main stage at all of your favourite festivals very soon. With vocals by Brett Carruthers, that seem to be a cross between Billy Corgan and Marilyn Manson, and hooks that will be stuck in your head for days to come, A.P.E. is not to be missed. Check out their amazing live show and you won’t be disappointed.
links: MySpace | Facebook

03. Rodrigo Wilde (Trip Rock, Dance/Experimental)
the Skinny: Definitely one of my favourite bands, Rodrigo Wilde takes elements from a plethora of musical genres and combines them into one awesome band. The best way to describe the sound is The Blood Brothers meets Queen; yes, it is insane. Lead singer, Alex Mei is an opera singer and barely needs a microphone, definitely a site to see. Rodrigo Wilde is currently recording their debut album, though it is hard to capture the songs as the band tends to improvise on the songs when in a live setting. Check out some live videos, and a show if you live in Toronto, while you wait for the album.
links: Facebook

04. The Box Tiger (Indie, Rock)
the Skinny: If you dig Metric, you’ll love this band. Every time The Box Tiger plays a show they walk away with a new legion of fans. Front woman Sonia Sturino’s vocals are some of the most pleasant I have heard in a long time and each song is catchier than the last. Sonia is also in Portland, ME based band In The Audience.
links: MySpace | Facebook

05. Citizen (Rock, Indie, Classic Rock)
the Skinny: If you’re down with The Tragically Hip and looking for some more “Canadiana”, check out this local award-winning band from Southern Ontario. Singles that will leave you singing and distinct vocals provided by Brad Moore, this band is a must-hear and you will be hearing more Citizen in the near future.
links: MySpace | Facebook

06. Fitness (Electro, Indie, Disco)
the Skinny: Ever seen an 80s workout video? Catching Fitness live is the same experience, but way more fun. Fitness will have you dancing, sweating, singing along and getting fit all at the same time. Fitness plays workout video inspired tunes and has a live show with musical theatre-esque dance numbers to go along with the stories told in their songs. Come out to a show and get your booty movin’!
links: MySpace | Facebook

07. Dancing With Paris (Hardcore, Metal, Pop)
the Skinny: DWP has a sound that we have coined “Meshuggah-pop”. The band itself sounds like a combination Meshuggah, Deftones and Poison The Well. Lots of groove, poppy choruses and 8-string guitars; Dancing With Paris is definitely worth a listen. You can download their debut EP for free on the band’s MySpace.
links: MySpace | Facebook

08. God Falls (Metalcore, Hardcore)
the Skinny: There are a lot of bands from Montreal on this list; however, none seem to be making as big of an impact on the hardcore and metal scene quite like God Falls. The band has been around for some time but is finally making their well deserved mark. Recently debuting their new album “Make Me Alpha”, God Falls will hopefully be breaking out of Canada this year and leaving all sorts of skid marks on your favourite under garments.
links: MySpace | Facebook

09. Mythosis (Metal)
the Skinny: When Chris Donaldson (known for his work with Cryptopsy) has a new band going, you know it’s going to take off. Reviews from various sources have labelled this band as the next Slipknot. Could they be? Check out the tunes and judge for yourself. If you have the chance to catch these dudes live, chat them up after, super cool guys…trust me.
links: MySpace | Facebook

10. Never More Than Less (Metalcore, Rock, Nu Metal)
the Skinny: Quebec City’s Never More Than Less have recently returned from touring France where crowds were going crazy for them. NMtL has just released “The Album” to their salivating fans and will be tearing up a city near you very soon.
links: MySpace | Facebook

11. Secrettes (Dance Punk, Pop, Electro)
the Skinny: Time to party? I think so. Though most people seem to find it impossible to admit they like catchy songs, Secrettes will change that. Hearts of gold, lyrics that you will be constantly singing, mixed with tunes that will have you dancing all night long is what makes this band great. Listening already and seeing when they’re playing near you? Perfect!
links: MySpace | Facebook

12. The Twin (Hardcore, Rock)
the Skinny: The Twin is a hardcore band from Ontario. There is obvious Poison the Well influence and a pleasant lack of the over-used chug-a-chug-a “breakdown”. Also, if you catch their awesome live show, you will hear a cover of “Row Your Boat”, it’s hilarious!
links: MySpace | Facebook

Thanks for checking out my list and I hope you enjoy the bands.

Check out the song: “This Is So Good”