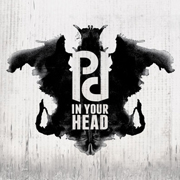 Playing Dead – “In Your Head”

In Your Head is the newest release from the New York based indie punk band Playing Dead. Since 2004 the band has been playing high-energy indie punk that begs to be played at full volume. With influences ranging from Weezer, The Alkaline Trio and The Pixies, Playing Dead’s brand of music is immediately listenable; and enjoyable and many of the tunes are infectious and incredibly radio friendly.

The indie punk scene is super crowded and the competition to be noticed is super fierce. While I do dig the overall vibe of In Your Head I’m not sure if this is something that sets them above the rest. Yes, In Your Head is a decent record, but I feel like I’ve heard these songs before. Not literally, but I feel as though any of the previously mentioned bands could have written these songs as well.

I don’t want to totally bash the band either because one thing the disc does have is energy… and I think if these guys capture that energy in their live show then there’s probably no space to move on the dance floor.

For me this is okay at best. Playing Dead has not necessarily recreated the wheel here, but if you are a fan of the indie scene than this record might be right up your alley.  [ END ]

Check out the song: “In Your Head”