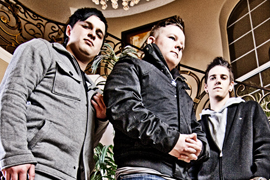 The Skinny: Party at Her Place! began with a great vision from David Bowles, after the retiring of his previous band, Shipshape and Bristol Fashion. Upon leaving the band he realized the “scene” was missing a different sound and needed something much more gratifying. An electronic band was something that had not been done before in his hometown, to do it he knew he would have to do it the right way.

After messaging long time friend Justin Mulvaney, who had recently left his band as well, they met up and it was the start to a great establishment between the two musicians. Both agreed they wanted to keep their hardcore backgrounds influenced in the music, but also keep a dance/electronic element in the mix as well. From hardcore edgy screams, to pop melodies and heavy dance beats they knew they were onto something spectacular. Only being together for about a month or so, they had their first show at a local venue. From screaming fans to flashing lights, they had brought their passion to a reality.

Party at Her Place! is a fast paced band known for their devotion to their passion. Also, having an excellent discography, from their very first demo, to their highly anticipated EP Elevated, they continue to impress more and more everyday with their music. Bringing a new style of music to the stage, Party at Her Place! is surely something you will not want to miss out on.  [ END ]