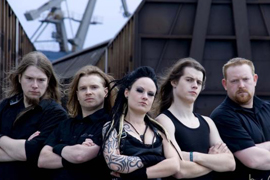 Today heavy metal hub Metal Army America is hosting an exclusive premiere of a new track from German metallers My Inner Burning. Head over to THIS LOCATION and check out the track “Masquerade” off My Inner Burning’s new album ‘Eleven Scars’ will be released on SPV/Steamhammer on March 22 in North America.

Listening to My Inner Burning’s powerful brand of metal, you can be certain that they have lots of triumphant victories ahead of them. My Inner Burning have the determination it takes, and they’re ready to present their second album, ‘Eleven Scars’ which will see a March 22nd North American release via SPV/Steamhammer – a surprisingly mature offering which highlights an impressive development compared to their already exciting 2009 debut. ‘Eleven Scars’ sounds groovier and a little darker than their first self-titled release. Guitarist Torsten Sauerbrey explains the reasoning behind their darker sound “Probably the many concerts we’ve played since, and the stronger influence of our vocalist Becky, who penned the occasionally rather sinister lyrics.”