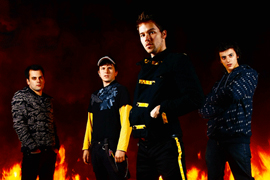 Kreso Stekovic, lead singer of the Italian alternative metal band Spellbound Dazzle, took some time out of his busy schedule to chat with me about the band’s newest release, Unreal FairyTales. This disc is an interesting mix of metal, folk music and even a bit of polka music and is definitely worth checking out. Here is what Stekovic had to say about the new record, Unreal FairlyTales.

Now that your new disc, Unreal FairlyTales, is complete how do you feel about it?
Kreso: We feel like we were pregnant for a long long time and now we are finally free to show everybody what came out from Spellbound Dazzle’s garage. We’re happy because this is a nice satisfaction no matter what will happen from now on. We’re also receiving good reviews from different countries and this makes us start well.

Are you satisfied with the outcome?
Kreso: It’s about to happen and we’re sure that everything will be alright, let’s see what happens now that the “Foolin’ of Each Other” video had its world premiere and hope that this is only the beginning, by the way you can watch it most simply on YouTube.

What was the writing process like for this CD? Did you guys all write together?
Kreso: It’s me and my brother Branko who usually write and compose most of the material, and once it is done we develop all our ideas together, I mean with the other guys of the band. This situation happened only for Unreal FairlyTales, at least I hope because I wish that we would write all together for the albums to come. Stefano and Dante have a lot of talent and sick ideas so the next album must be something explosive and we are already working on it. We also have enough material for other three albums, but let’s just concentrate on this one for now.

How long did it take?
Kreso: Well most of the songs were written even two or three years before Unreal FairlyTales and others were written just prior the recordings. So the complete period could be three years, otherwise, if we only add song per song period it could be two months. We first recorded the whole thing at Majestic Studio (Venice) than went to the Woodhouse Studios in Hagen, Germany for mixing it. The recording process took 18 days and the mix 12.

The name of the band is interesting to say the least and sounds as if there is a story behind it. Where did the name come from and what is the story?
Kreso: That’s what a lot of people say before they know the real story: how did we come up with the Spellbound Dazzle name. Well, after a long period of thinking about the right name, with no good results, my brother just took a dictionary, looked in, pointed his finger on the first word of the first page he opened and he found spellbound, a step after became Spellbound Dazzle. Simple, don’t you think??? But also makes me think about a magic dazzle that captures my look and gets me spellbound, this is what we’d like our music to transmit, something like magic.

Give us some insight into the record and the meaning behind its title?
Kreso: Unreal FairlyTales is probably the right title, If you pay attention to the song lyrics they’re all inspiring in weird tales that can exist only inside the music of this album or probably in our heads. For example “Spaceman”. This story takes place somewhere in the parallel universe and there are two characters who are Spaceman and a no named person (a space bounty hunter) who’s trying to catch him for many years. Spaceman is a negative and evil character (look at the red devil on the cover, that’s him) and the hunter must kill him and bring back the peace into the universe. Or another one for example is “Rullo”; this song talks about a weird space car race running on a fired highway, fighting for the first position, even killing each other like on a video game. So, other songs are similar, I mean they’re all fantasy lyrics except for the ballad “In My Room” which is a love ballad.

Are there any tracks on this record that are personal favorites or that have good stories behind them?
Kreso: Two of my favorites are “Ruska” and “SBD.” “Ruska” is a Balkanic folk rock song that somehow represents us, because it shows the roots of me and my brother (Croatia Ex-Yugoslavia), but I like it because of its funny dancing rhythm and melodic riff. And “SBD”, because it’s the song that talks about us and best represents the band. What should I say about “WITM”? (When I Touch Myself) maybe it would be better not giving too much explanations about this one don’t you think? These are our favorite ones, but all the others are on the same level.

What artists would fans be surprised to find on your iPod?
Kreso: I think they would be not only surprised, but they probably won’t believe me because they could find a lot of different genres: classic music, pop music, punk, rock, metal. They could find the Beatles, Avenged Sevenfold, Mozart, Queen, Tchaikovsky, Elvis Presley and many more. So as you can see we don’t listen to only rock or metal, because we don’t want to play the same genre, it gets us bored.

If you had not become a musician what other career path would you have liked to attempt?
Kreso: Well, we are not professionals, maybe we’ll become one day, but we’re not yet. Although I think I should probably attend an art school because I like drawing and painting. (See the CD cover: that was my idea and first sketch). My brother is an electrician, Dante our bass player works in a pet shop and Stefano our drummer works as a mechanical engineer in a factory, and I take any job I can.

What three words best describe your band?
Kreso: Bitches of rock? Is it too vulgar? This is because we like to play many genres and don’t want to stick with only one. Sorry it was the only thing that came to my mind.

If you were a superhero, who would it be and why?
Kreso: If I have to give an answer to the world for not being a fool I would say Batman because he’s dark and rock, he always hides and when he takes his mask off he lives in a creek far from anyone. But if I have to answer you seriously I would say my grandfather, because he always brought us with him anywhere he was going to and my brother and me had one of the best moments of our lives. Then, suddenly a stupid war begun and we had to leave our home, our parents and friends without any choice. So everything started all over again, another country, another language, school, and friends and for many years we couldn’t get back, because of the still active danger. In the meanwhile our grandfather died and living far from home became even harder. We only had to learn in life, even if sometimes seems unfair, but in my life my grandfather was and will be my hero.

Do you have any touring plans made yet?
Kreso: It’s not easy for upcoming bands like us to be booked by clubs, but we’re trying our best to play shows everywhere on this planet. This Summer we will play some shows in Germany and Italy and hope to play in the rest of Europe.

Any plans to hit the States?
Kreso: Okay, we’re leaving tomorrow if this is an invite… we’ll see what will happen, but we would really really like to go to the States. There are so many good rock bands and we’d be honored, furthermore we know American girls are hot.

Any closing words?
Kreso: Hope to see you all as soon as possible, possibly on a gig in your country. Tell everybody that Spellbound Dazzle is coming and don’t forget to pick up our album Unreal FairyTales  [ END ]