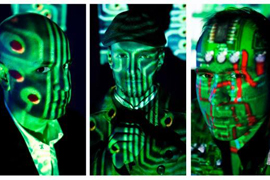 We recently had a chance to speak with Ron Scalzo, vocalist for the alternative metal band Return To Earth. The group’s sophomore CD, Automata, was released back in August and since then has gained accolades and respect from critics and fans alike. Automata is not your typical hard rock/metal disc and Return To Earth are not your typical band. Their music combines influences from many different genres and blends them together to form a truly unique sound all to their own. Here’s what Scalzo had to say about the band, the CD and their plans for the future.

The name of the band, Return To Earth, is interesting and sounds as if there’s a story behind it. Where did the name come from and what’s the story?
Ron: When the three of us started to get together and decided, “Hey, this is some good shit, we’re gonna release it as a band,” we were all at interesting places in our lives. Chris was exiting Dillinger Escape Plan and was being courted by Coheed, I was starting my label and struggling to maintain my electronic project Q*Ball, and Brett really hadn’t been in an active project for a while. In this band, I think we all found a comfort zone, that we were all excited to be doing something that was short on drama and controversy, going back to basics of just getting into a room and making music – we were all kind of floating in space in the music industry, and here was something that grounded us, so I suggested Return To Earth.

What has been the response to your newest disc, Automata?
Ron: Generally positive, at least to the outlets it’s been exposed to. We all wish the exposure level was a bit higher, but who doesn’t? We also knew the challenges of releasing a record that couldn’t have proper tour support due to Chris’ commitments to Coheed, so our expectations have been reasonable. We got some nice write-ups in Kerrang! and Metal Hammer, a nice spread in Keyboard Magazine, and obviously Chris’ participation raises our profile a bit. A lot of favorable comparisons to bands we all dig on, so no complaints.

Do you find you are still satisfied with the outcome after it has been out for about 6 months now?
Ron: I don’t think I’d ever use the word “satisfied.” We’re proud of the album; we want the whole world to discover it. We know how the game is played – Metal Blade has a lot of acts and a small staff, I was hopeful they’d allow my label, Bald Freak Music, to participate in the promo end of things because after a certain amount of time they were gonna start focusing on other things and Bald Freak could maintain the push. So many bands get signed and then sit back and wait for something to happen. Not us.

I think our video should have gotten more exposure, I think satellite radio should have picked us up for some spins, I think “The Replicas” is a no-brainer for rock radio, I think we should be on tour opening for some big acts. But most of that is out of the band’s control. Through our mutual efforts, I think we’ve at least created a buzz that will hopefully catch on when more new music is released. Everything is “old” in 10 minutes nowadays, and 6 months in, we’re still doing interviews, starting to set up shows, getting good reviews, so it’s good to see that people are still interested.

What was the writing process like for this CD? Did you guys all write together? How long did it take?
Ron: Chris and Brett write the majority of the music, lay the foundation with drums and guitar, come up with a solid skeleton and send off to me to come up with melodies, lyrics, harmonies. Sometimes the other guys already have ideas about the melodic direction of the song and I vibe off that or tweak it a bit. It’s sort of an assembly line process that works for us, and kinda has to work since Chris is often on the road.

Give us some insight into the meaning behind its title, Automata?
Ron: Brett came up with the concept – Automata is basically the idea behind man creating machinery to ultimately do man’s work. The irony there, the conundrum that creates, is pretty fascinating, especially in an age where analog tape and real instruments have generally been replaced by the digital age, virtual instruments, limitless FX plug-ins. We all use computers to make music now and it’s a pretty strong love/hate relationship. We embrace it for a lot of reasons and reject it for others.

What is it that normally gives you inspiration when writing lyrics and is there a theme or themes behind the writing of this record?
Ron: All my lyrics are pretty personal and I tend to morph all these personal experiences into the overall theme of the album. “Night of the Exploding Razors” is about my frustration with my failures in the industry and my determination to succeed in spite of it. It’s essentially about learning from your mistakes – “We’ve gotta get it right this time” is a hook that I think speaks to every flawed human being out there. “Everyone is God” basically says that we all have a choice, we all can make things happen if we want them to.

“Edge of Forever” is about my uncle’s death in a fatal car accident. I scream “I don’t wanna waste another breakdown” in the chorus – when I got the call that he was gone, I lost it – this feeling of overwhelming grief that everyone feels at least a few times in their life. It’s such a bad feeling, but such a powerful one, it makes you think that you only have so many of those in you before you lose your mind. “The Replicas” is about finding “the one” – “Our only chance to save the world” means your own world; you and this other person together can make everything right if you commit to giving your heart completely to each other, which as we all know, is not easy to do.

What can fans expect when they pick up a copy of Automata?
Ron: The majority of reviews hit on a common theme – that we can’t really be categorized – we’re not “metal” in its truest sense, we’re not “alternative.” Brian Slagel called us “prog rock.” Are there elements of all of these in our music? Yes. But I think the thing that holds this band and this album apart from the rest of the pack is intensity. We’re three intense dudes who made a heavy, emotional record. There’s nothing cookie cutter about us, even if we know how to write a catchy hook every now and then. I think that sets us apart, too – that mix of “commercial” songwriting sensibilities mixed with writing songs in 7/8 time or whatever. Brett and I have had our struggles in the industry, we write and play with a purpose, with a bit of a chip on our shoulders – “Why not us?” And why not? We have the privilege of writing and playing with one of the best drummers in the world in Chris Pennie, and if you wanna see intense, just watch that dude play the drums.

The songs on this record are not exactly what you would find on your typical hard music album. You offer a welcome range of musical sounds and abilities. Do you think this is due in part to your varied influences and/or a desire to explore new realms of music?
Ron: Yes! Both, especially the latter, play a part. Brett and Chris are explorers; they’re easily bored, almost in a manic way. I have more of an open mind, I think, as far as what’s good and what isn’t, but we all generally dig the same music – Nine Inch Nails, Metallica, Deftones, Mars Volta. Chris and I are both big fans of ethereal electronica – bands like M83 and Sigur Ros. We all dig Peter Gabriel. We write what gets us pumped, not what we think will pump up other people, and I think there’s an honesty there that you can’t manufacture, it just happens. The first time Chris played his demo of the album’s title track, I got the chills – like, “You want me to sing over this madness?” We challenge each other and the results are what you hear on Automata.

Do you have any touring plans made yet?
Ron: We’re finally working on that, setting up some local warm-up shows next month in NY and NJ in hopes that we can jump on some tours over the summer. Chris’ schedule is refreshingly open this year, and we’re primed to take advantage of that. We picked up a bass player, Mike Depko, and the live set is starting to come together. If you know anyone who wants to get out on the road for a few weeks, call me!

What artists would fans be surprised to find on your iPod?
Ron: I have pretty eclectic tastes. I like Adele; I like Girl Talk, The National, DeVotchKa. Lots of soul and funk from the 60s and 70s. James Brown is a hero. Tears For Fears. Been real high on a band I just signed to my label called The Head Set – great retro modern rock sound that deserves attention from the universe.

Tell me about a book or two that you’ve read that you think other people should read?
Ron: Right now, I’m reading a NY Times bestseller called “The 4-Hour Workweek” – it’s written for nut jobs like me who work, work, work, caught between the desire for financial security and the passion to follow my own dreams. Derek Sivers from CD Baby recommended it, and these books aren’t usually my thing, but I’m in my mid 30s now and I’m still searching for answers as far as time management – running a label, being in 3 bands, working a full-time job, spending time with family and friends. I want to travel, so much I still aspire to do. Sleep, for instance.

If you had not become a musician what other career path would you have liked to attempt?
Ron: Definitely writing or acting. I’m a creator, and I’m generally antisocial. I love the movies; I love escapism, great character actors and classic films. I would definitely be writing a screenplay or three if time allowed. Would love to write and voice my own animated show, like Aqua Teen or Robot Chicken. I think writing in the Hollywood has been so dumbed down these past few years, I know it’s something I could do and do well if I lived in LA instead of NY and didn’t have so much on my plate.

If you were a superhero, who would it be and why?
Ron: I’d actually prefer to be a super villain. Lex Luthor is a no brainer simply for the similar hairstyle. He’s also a misunderstood genius, as am I. Or maybe I’m just misunderstood.

Any closing words?
Ron: Thanks for coming to the table with great questions and supporting our band. If I were a super villain, I’d ask you to join my rogue gang of no-good hoodlums. We’d own this town.  [ END ]