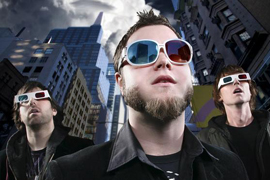 Jeremy Haffner, lead vocalist and bassist for the alternative/progressive rock band Oedipus, spoke with me about the group’s latest project Tres Las. Propelled by the huge success of songs such as “Tres Las” and “Burn It Down”, the band has been making quite a bit of noise in the music scene. With influences from such great bands as The Muse and 311, Oedipus has created a sound that is fun and enjoyable to listen to. Here is what Haffner has to say.

Different groups have unique ways of writing their songs. How do you guys go about writing your music? Is it a collective effort or is it more the efforts of one particular member of the band?
Jeremy: We tend to write solo, and complete collaboratively. Song writing is like waiting for a phone call, there is no real schedule to it, and you never know when or how often it will happen, so when someone has inspiration, we let them run, and do our best to help edit and augment the song, to make it sound as good to us as it possibly can. The best songs always come together very quickly.

I am familiar with the term Oedipus, but what is the significance of calling the band by that name?
Jeremy: We started using the name Oedipus, while in Middle school Latin class. At the age of thirteen, the relative shock value of the name was reason enough for us, while the obvious context and taboo of patricidal incest was also definitely something that was and is something fascinatingly dark and interesting to this day, for many people. Also, it’s a great powerful word that just feels good rolling off the tongue.

You have released two big singles, “Tres Las” and “Burn It Down”. Did you ever expect these songs to become so popular?
Jeremy: We were, and are definitely surprised at the scope of how big these songs have gotten, but we did have a sneaking suspicion that they were going to be well received, mainly because of how much fun we had playing them. We tried “Tres Las” out, live, at an underground show in LA before we recorded it. From the way the crowd bounced, which is hard to get crowds to do in LA, we knew we were onto something. We’re getting the same feeling from a number of the new tracks on our upcoming LP.

Now that your self-titled full-length disc is complete how do you feel about it and are you satisfied with the outcome?
Jeremy: The Self-titled full length release, while just available in Europe, has been hugely successful for us, and feels amazing. Some of our favorite live songs didn’t make it on to the album, which happens sometimes, but the collection as it stands, came out great. We’re also feeling very happy about our next album, available in the US in June 2011.

Are there any tracks on the disc that are personal favorites or have good stories behind them?
Jeremy: Most of the European Oedipus album is a chronicle of highly sexualized frustration and release over the period of the last touring year. However, my favorite song off that album, “Burn It Down” is about an argument I had with my old boss right before I left a job. It’s incredibly cathartic to sing that song night in and night out.

What kind of touring plans do you have in support of the record?
Jeremy: We’re in the midst of discussions and booking for the whole of 2011 starting with some Western regional stuff within the next month, so we can keep recording, and culminating with the 2011 album release, some US Summer festivals, and then back to Europe. It’s going to be a lot of fun, and we can’t wait to get out there again.

Any plans to tour the States at all?
Jeremy: Absolutely. We love traveling the US. There are so many countries within in this country, with so many different, awesome people to meet; we definitely have a serious American Rock and Roll wonder lust.

What artists would fans be surprised to find on your iPod?
Jeremy: Harry Nilsson, Yo Yo Ma, Paolo Conte, Andrew Lloyd Webber, Tori Amos, the list goes on. We listen to everything, as should everybody. Not sure if that’s shocking or not.

Tell me about a book or two that you’ve read that you think other people should read?
Jeremy: As someone in and out of commercial Kitchens, I definitely recommend Anthony Bourdain’s “Kitchen Confidential” and “Medium Raw.” As far as fiction, I recently read an enjoyed “Apathy and Other Small Victories.” Also with everything going on in Egypt, Tunisia, Algeria, and Yemen, I’m about to reread Kahlil Gibran’s “Spirits Rebellious.”

If you had not become a musician what other career path would you have liked to attempt?
Jeremy: I believe that everybody has multiple careers, and should always keep their hands in a trade. Regardless of how successful Oedipus keeps getting, I’ll always come home and cook in my family’s restaurant, because you never know when the rock and roll ride will end. Plus… it keeps me honest about who I am.

If you were a superhero, who would it be and why?
Jeremy: It’s not glamorous, but I’ve definitely day dreamed more then once about having the powers that Evie, from that 80’s TV show “Out of This World.” Aside form the unpunished mischief I could get away with, It just seems comforting to be able to freeze time, and take a minute to be absolutely alone, and quite. In this ever shrinking world of ours, it’s hard to find any time to get away from email, cell phones, and TV.

What is the one thing you absolutely insist upon in your rider?
Jeremy: Jack Daniels, Ginger Ale, Blackberry jam, and Jiffy creamy peanut butter. I have simple tastes.

If you could jam with any famous musician, dead or alive, from any century, who would it be and why?
Jeremy: Les Claypool, because he took the bass and made it an interesting, irresistible lead instrument for me, and many many other kids who picked up basses in the 90’s.

Any closing words?
Jeremy: Don’t try to be cool, just have fun, and don’t care what anyone thinks of it. There is no time to waste. Health, Wealth, and Wisdom.  [ END ]