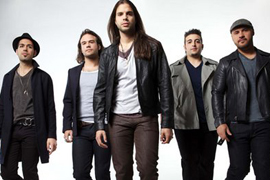 Atom Smash is definitely one of the big and up and coming rock bands in North America right now. Formed in 2006, the group has come a long way in a relatively short period of time. Atom Smash released its debut album Love is in the Missile at the end of last Summer and so far it’s been one of the top hard rock releases of the end of the year. The single “Do Her Wrong” has been a huge hit on rock radio and the guys have been busy touring their asses off since the album came out. After a very busy touring schedule in the autumn, the band will be hitting the road again soon with a few concerts in the South-west area of the U.S. planned for the beginning of March. We recently spoke to the group’s lead singer Sergio Sanchez about the band, how they got started, their debut record and what we can expect to see from them in the future.

You’re out on tour right now across the United States. How have things been going so far?
Sergio: Going great, just did a few dates with Non Point which were a lot of fun. The shows have been kind of eventful and a lot of fun.

Atom Smash formed in 2006 in a fairly unconventional way. Tell us how the band came together.
Sergio: It started with Paul Trust, a producer in South Florida and I, we started writing songs and then we slowly started piecing the band together. Dee from Austria, we met online, brought him on board, then Arnold jumped on board maybe a year later and then in a few years we just kind of put it together and got what we thought were the right guys for the band. Then we toured for year last year with the full line-up, well almost the full line-up with Taco on drums and then Cowboy jumped on this year. It’s just been sort of ever year a Christmas gift or something of a new member. In ten years we’ll be Slipknot.

2010 has been a monstrous year for the band in terms of mainstream success. Now that the end of the year is approaching would you say you’re getting a little exhausted from how busy you’ve been?
Sergio: Um, no not really. I would say no matter what it’s day to day how exhausted you’re going to be as far as when you’re on tour. It really just depends on how much fun you’re having. So it kind of goes hand in hand but I wouldn’t say the actual music or the press has been exhausting. I would say if anything the fun has been exhausting…

The success of 2010 has culminated with the release of your debut CD Love Is In The Missile at the end of the Summer. Now that it’s been out there a couple months, how are you feeling about the record?
Sergio: You know I feel great about it, I think it’s definitely our first record and it has a lot of variety on it. You can tell that it took years to put it together and there are songs on it from different times, you know, one song could have been written years prior to another one. I mean, I would definitely say that it’s not the best you’re going to see from us, but I think we continue to grow as we perform live as the members sort of start meshing even more and as we keep getting more inspired by it. I would say I feel really good about it.

What was the writing and recording process like for the record? How many songs did you write and how long did it take to record?
Sergio: Uh, well we had an album prior to this album that was never released and uh, we took songs from that album so I would say all in all for this album there had to have been about fifty to a hundred ideas out there before we actually picked the eleven for the record. We definitely like to sift through a bunch of stuff, we don’t necessarily just go “we’re going to write fifteen or twenty songs for an eleven song album.” We’re more like “we’re going to write like you know thirty or forty demos and maybe a hundred total ideas.” But the recording process is fast, that’s the easiest part.

Both David Bendeth and Paul Trust have played an important part in the success of this band. Was it difficult at all going with two co-producers instead of just settling on one?
Sergio: No, I wouldn’t say it was hard or anything, it was actually kind of good because you can get the best of both worlds. When you’re doing an entire album with somebody you’re obviously going to get on to the style of that guy. I think that it was actually a positive thing, but I’m not saying that in the future I would necessarily do that. But I definitely like the idea of either doing a lot of tracks on our own and then maybe doing a few singles with the producer, it’s kind of neat to kind of be able to take a breath and have a different person working on it so I was okay with that part.

There is definitely a strong sex appeal attached to the band, evidenced by the album cover and title and on your official website with your “Bombshells” section of female fans. Bands with your sound for the most part appeal to younger guys. What are you finding your fan base to be like? Is it a more even cross-section of guys and girls?
Sergio: Uh yeah, I would definitely say that we have… I don’t know if I would say more girls than guys, but I would say it’s a very good mix of girls and guys. In comparison to maybe previous bands that I was in, this band definitely has an appeal that spreads across the board. I don’t know that I expected that, but Francis wanted it to be that way or was trying to do it that way. Even on Facebook most of our fans are under seventeen years old, but when we go to play live you’re not going to see them because venues aren’t really all ages. So it is pretty spread across the board and I’m pleased about that.

You describe your sound as “modern grunge.” What grunge era album or albums would you rate the highest in terms of the influence they’ve had on this band?
Sergio: Hmm, on this band, wow, I guess some of the obvious ones would be Stone Temple Pilots Core and I would say some of the romantic aspects of the band are a bit more of a commercial version of Pearl Jam’s Ten, you know some of the songs have more of a romantic approach lyrically. Then a little bit of the Superunknown kind of quality but I think we’re all completely influenced as a whole, as a band by groups like Aerosmith and obviously Deaf Leppard, groups like that from the ’80s. I love grunge, that’s definitely my favourite era, but as a band I’d say we have a bit more of a fun nature to our music than maybe the grunge bands had.

Aside from you guys are there any other “modern grunge” up and coming type bands out there right now?
Sergio: Well yeah, you know it’s weird because it’s hard to put a label right now because there’s so many generations of really great music. There’s five guys in a band to sort of feed off of that they maybe in the early ‘90s had some sort of hatred to ‘80s hair metal. But they still sort of had some of that quality when it started, groups like Alice in Chains still had an ‘80s sort of stadium sound. I guess what I’m trying to say is that as we start writing more music some of our stuff is reflecting you know Deftones or even groups like Flyleaf. Bands out there have a lot of variety, I think that you can see that within a band like Shinedown. But up and coming bands that aren’t really big yet, I can’t think of a lot of bands that have or look like grunge. I think a lot of the up and coming bands reflect more of a processed, kind of modern, state of the art sound. Maybe a Halestorm has some of that sound but they also have an ’80s vibe to them.

You’re on tour right now with a lot more to come in 2011 I’m sure. What does the band have in store for the first part of the New Year?
Sergio: Well I have a feeling that we’re going to do some recording soon, just getting back in the studio a little bit. I think we’re going to be out on the road a good part of the new year, I like to spend most of my time out on the road along with the rest of us. There’s a lot of people out there to reach, it’s harder now, radio is getting tougher, MTV doesn’t play music videos anymore. You gotta out there and get in their faces and make an impression, have a few beers with some people.  [ END ]