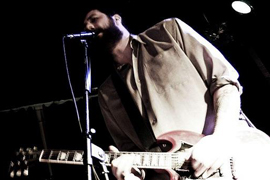 Starting today, Noisecreep.com is offering an exclusive stream of a “Funeral Song” from the forthcoming release by Georgian Skull entitled ‘Mother Armageddon, Healing Apocalypse’ which is scheduled for release on March 22 on Scarlet Records. Get your first listen of the new song RIGHT HERE.

Inspired by 1970’s Heavy Metal such as Black Sabbath, Led Zeppelin and Thin Lizzy, Georgian Skull have fused the past with even heavier metal bands like Clutch, Pantera and Entombed. Georgian Skull continues to redefine their sound and presence as one of the most important bands to have come out of Canada. The death of the stoner band Mister Bones brought out the most significant chapter of the band’s life: its afterlife. Which is simply known as Georgian Skull. A revolution is on its way, a great tale is about to be told, and the power of the Doom and Groove that possess this band will set out to unleash a masterful work in their new album, set to be released on Scarlet Records.