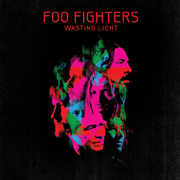 The Foo Fighters are back! After three and a half long years, Dave Grohl and the Foo Fighters have finished their seventh studio record Wasting Light due out April 12th. Grohl kept busy during the hiatus with the ever awesome supergroup Them Crooked Vultures, so we should cut him a bit of slack shouldn’t we?

The first single from Wasting Light, “Rope,” was just released to radio this past week. With the long break and the fact that the last Foo Fighters record Echoes, Silence, Patience and Grace was definitely not the group’s best work, I wasn’t sure what to expect from “Rope.” I’ll admit, I didn’t like the song the first time I heard it, but I can safely say after a couple of times hearing it again, “Rope” can be put up among the other Foo Fighters gems of the last fifteen years.

The song does start a little slow, but by about the one minute mark you’ll be getting right into it. The guitar riff is very cool and is nicely topped off by a classic Grohl “owwwwww” to get the chorus going. “Rope” isn’t quite up there with “Monkey Wrench” and “All My Life,” but it’s a very solid song which hopefully is only a sign of things to come for the new record Wasting Light.  [ END ]

Check out the song: “Rope”