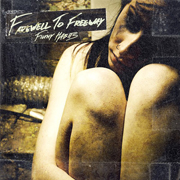 After a bit of a lineup change, Farewell To Freeway are back with a hot, new album. The name of this release is Filthy Habits and with a new lineup, one can’t help but wonder how this will affect the group’s sound, especially with no female keyboardist.

Upon hitting play you hear a bit of bass and drums, which just suddenly stop. Is there something wrong with the CD? No! All of a sudden the band crashes into an upheaval of sound and bring with it the traditional Farewell To Freeway sound full of heavy verses and melodic choruses. The notable changes that occur on Filthy Habits happen to be with the guitar work. There is more focus on the guitar then in the past, and some great licks are thrown in. This serves to create a heavier sound; one which the kids should go crazy for.

Filthy Habits demonstrates a change from previous albums. Even with the difference in sound, the release is great and Farewell To Freeway are as strong as before. Victorious fans of A Day To Remember, Arise And Ruin, Within The Ruins and Beneath The Sky will want to sing along to this record.  [ END ]

Check out the song: “Liquor? I Don’t Even Know ‘Er”