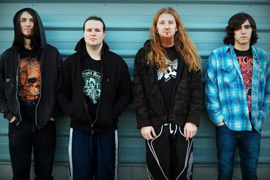 Dusks Embrace is the premier unsigned metal band from Oregon and is currently on their way up. In a scene that is mostly driven by hardcore and deathcore, the blackened death metal sound of Dusks Embrace is quite refreshing. They’ve been compared to Opeth, In Flames and Children of Bodom, by Hello Music, and “…In Flames meets Killswitch Engage” by some drunk guy at a show.

The quality of recording that is demanded by singer, guitarist and producer Josh Brewer is like nothing I’ve seen. I spent two hours in the studio with Josh and Joey, and they got 40-60 seconds of good audio out of that 2 hours spent recording. Josh had this to say about Dusks Embrace’s DIY mentality, “Since we do it ourselves we can spend from two to three months doing the actual tracking and mixing which allows us the ability to spend time crafting the songs in the recording process.”

“Typically when we start recording, the basics of all the songs are written. However, a lot of the time, there is still plenty of keyboards and vocals to write and even some guitar leads to tweak. So having the ability to pace the recording process has been really beneficial for songwriting.” Josh Brewer demands the best of himself as a producer and pushes himself very hard to make the best possible product. “I wouldn’t say he’s a Nazi…” says Joey Westerlund, guitarist, when asked about what it’s like to work with Josh as a producer, “he’s more of a Sith Lord.”

Natural talent is the way to describe Dusks Embrace. These guys produce the highest quality content, which made me wonder about their live performance. With tracks that blister and have so much depth, can they pull it off live? YES! All the keyboards are written by Josh, and then sampled out via laptop, and the guitars are just as good live as on the album. Josh does all the vocals, both recorded and live, and he uses no vocal enhancement. His sound is his sound. It translates to a live performance that’s on par with the quality of the record. When asked about writing and performing, Joey responded, “It’s pretty sweet. It’s kind of weird telling people that I helped write and record a death metal album when I’m only 17.” I responded saying “At 17 you are more talented than a lot of guitarists with years of touring under their belts.” Joey responded, “I’ve only been playing four years and never had lessons. I would say I’m ahead of the growth curve.”

I was curious about what inspires a death metal band, as most would be. Josh said, “Probably all the European metal bands. I’ve always been influenced by how they create music that is both beautiful and heavy.” I know they recorded Twilight Enigma in a church. That prompted me to ask Josh about the role that religion plays in his songwriting. He continued, “I grew up in the church and my father was and still is a preacher. So religion has always been a big part of my life. I started learning things that the scientific method has uncovered about the world and the universe around us and no longer felt that the stories of the Bible or any other mythology made sense anymore.” Joey told me, “‘The Giver’ is probably the greatest book ever written.” As it turns out, that’s assigned reading for the young gun.

Show Dusks Embrace and the music industry that a band that is dedicated to putting out great music and are willing to take the risks that comes with making music with a DIY mentality. With the internet being the primary catalyst of how music gets out there, it is possible for a band to do it for themselves and succeed. Go pick up their albums on Amazon or iTunes.

Check out the song: “Imagination’s Cruelty”