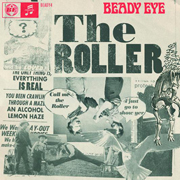 Beady Eye (aka Oasis lite) is the brand new British rock group fronted by none other than former Oasis lead singer Liam Gallagher. Noel and Liam beat the crap out of each other one final time in Toronto in 2009 which has led to Oasis (minus Noel) carrying on the rock n’ roll dream while Noel is pursuing a solo career. The group’s debut record Different Gear, Still Speeding is due out at the end of February with the album’s first single “The Roller” just hitting the streets.

“The Roller” is a surprisingly catchy and laid back tune that is definitely radio friendly. It certainly and noticeably lacks Noel’s classic guitar riffs with none of the instruments particularly standing out. Liam’s voice has boasts a cool effect, but what is also noticeable about the song is the inability to move on past John Lennon and The Beatles. “The Roller” reminds me a lot of John Lennon’s solo career (compare it to a song like “Instant Karma”) which I guess isn’t exactly The Beatles, but is surely close enough. Although lacking in originality, “The Roller” is a solid debut from a band that may find it quite difficult to carry on the torch without Noel’s guitar playing and song writing prowess.  [ END ]

Check out the song: “The Roller”