Flavio Monopoli spoke with me recently about the new projects he is currently working on. Monopoli is a multi-talented musician, producer and arranger who resides in Toronto, Canada. His latest projects include a new CD with ex-Gruesomes guitarist Gerry Alvarez entitled Omega Tea Time, work with Canadian Tenor Derrick Paul Miller, and a new show based on the ‘80s entitled ‘The 80s Hit Parade’. Here is what Monopoli had to say about his many different projects and more.

You are a busy man, can you tell me about some of the new projects you are working on?
Flavio: At the moment I am completing work on a 5-song EP for Canadian Opera Company tenor Jason Lamont and working on a new Elusive Project X album. This will be our third album and it’s due out in the fall. And – All the work I recently completed in the classical domain has inspired me to write an opera. It will be a serious piece about Canada – not a rock opera and I’ve recently started the libretto.

I understand your most recent projects are a new CD with ex-Gruesomes guitarist Gerry Alvarez entitled Omega Tea Time, work with Canadian Tenor Derrick Paul Miller, and a new show based on the 1980s entitled The 80s Hit Parade. Can you tell me a bit about these?
Flavio: I was a big fan of The Gruesomes and was thrilled when Gerry asked me to play drums in The Odyssey a few years ago in support of his first solo album entitled, “Candy Prankster.” I was even more surprised when he asked me to produce the new record. “Omega Tea Time” is a collection of new material in the vein of The Beatles’ “Revolver.” We spent a few months together at my house in Toronto making the record. It was just Gerry and I. To this day it was the best experience I’ve ever had making music. I think it was due to being so in tune with each other’s influences. Derrick Paul Miller’s new CD, “It Is Well” is the most musically challenging record I have completed. It is a spiritual record with a small ensemble of classical musicians, some wonderful singers and a children’s choir. It took me a number of months to finish it and I am very proud of what we accomplished. “The 80s Hit Parade” is a 3-hour dance show I devised a number of years ago, but only recently completed. It features 38 number one songs from the ‘80s performed by a killer 4-piece band and backed by a multi-media component featuring 100s of pieces of trivia and on-screen VJ hosts. It’s a great party and so far the response has been stellar!

I was just wondering what kind of a musical environment you grew up in? Did you have any formal training?
Flavio: I grew up in Montreal. My parents are pretty traditional and music was not a very big part of my early life though I did play accordion as a kid (shhh, don’t tell anyone!) High School is where it really started. I was actually defaulted to the drums because the rest of my friends already had other instruments so they said: “If you want to be in the band, you need to buy a drum set”. I did. For $10 and a knuckle sandwich. Funny, thanks to Facebook I recently re-connected with the guy who punched me for non-payment! As for formal training, I studied composition and arrangement at University. I could have never done the classical records I’ve recorded without that background!

Do you ever have any pressure from the record labels to make a hit record?
Flavio: I am part of indie culture. I enjoy making records for artists that are into doing it themselves. The times I have worked for labels they’ve been small indie labels as well so generally the vibe is to try and make music that the artist is happy with.

What projects are you the most proud of?
Flavio: I am actually really proud of everything I’ve done. I think recording is like painting. It’s immediate. In the same way a painter can never mix colours the same way twice; you can never re-create the sound you commit to tape, or computer. It’s spontaneous and is a true representation of where the artist – and I – was when the record was made.

Do you decide on a suitable sound fairly quickly, or do you tend to tweak tones obsessively?
Flavio: I have an approach to recording that is a little obsessive and a little quick. I love technology. I love being able to express an idea without having to worry too much about making it work immediately. Sometimes when I record drums, for instance, I’ll play the track as discussed with the artist. Once the song is done and the click track is still running I’ll improvise fills. Some get cut into the song. Some don’t. Technology allows me to tweak after the fact.

You’ve been in the music business for quite a number of years now. What drives you to keep going year after year while the music business is not in a very good state?
Flavio: I’ve been thinking about that a lot lately. It comes down to this: Being a musician or artist is not a choice. It is who we are. It’s our passion. The state of the music industry scares me. I hate that people steal music. It’s a polarizing statement I know, but the only way for the music industry to survive is for it to generate revenue.

Have you listened to any artists recently that have moved you?
Flavio: I listen to a lot of music. I am constantly trying to find something new – something that isn’t a re-hash of old ideas. A very close friend introduced me to Florence and The Machine, a band that I think is great. I really like Die Antwoord from South Africa. I think their brand of Hip Hop is so progressive (and scary!). I also recently started listening closely to Smile by Brian Wilson and Gershwin conducted by Bernstein. Genius!

Do you prefer studio or live?
Flavio: I like them both for different reasons. To me recording is a permanent record of one’s artistic vision. Live performance is an opportunity to expand on those ideas and have fun with them.

What artists would fans be surprised to find on your IPod?
Flavio: Barry Manilow likely. It’s important to listen to everything and not judge. He wrote some amazing pop songs.

Tell me about a book or two that you’ve read that you think other people should read?
Flavio: In terms of work, I was given a book called “Recording The Beatles.” It fascinates me. It shows details of how they recorded everything. They took amazing notes. I had a conversation about the recording process with Joao Carvalho a little while ago. We essentially ended up agreeing that despite advances in technology, the fundamentals of recording have not changed since the Beatles. Les Paul invented multi-track recording, but the Beatles invented the rest! (In my opinion).

If you had not become a musician what other career path would you have liked to attempt?
Flavio: I was on the path to becoming an airline pilot. I’m glad I didn’t!

What three words best describe your band?
Flavio: At present the only band I have is the one that plays with me in The 80s Hit Parade. To me it is energetic, musical and fun to watch.

If you were a superhero, who would it be and why?
Flavio: Ha! I’ve been asked this before, but the last time John, the bass player, answered for me. In essence I’ve had a lot of time to think about it. I think I’ve always been a fan of superheroes that use technology. I think it’s feasible for there to eventually be an Iron Man or a Batman, but I have a hard time with the concept of Superman. So… Answer is Music Man – able to make music at the speed of thought!

Any closing words?
Flavio: I recently posted this on Facebook. I believe it is imperative to saving the music industry that we once again worship music the way we once did. Remember how Tuesday was the best day of the week because you would stop by the record store on the way home to see what records had come out? Remember when you had 1,000s of LPs that you worshipped? You stored them alphabetically and sometimes categorized them too. When you wanted to listen, you took them out carefully, cleaned them, placed them on the turntable, and never left them flat after you played them. Once you were done, they went back into their sleeves and back into perfect storage. Remember looking over the liner notes and artwork, how you used to spend hours tracing logos and the pictures off the sleeves.

Where did it all go wrong? When did music change from being a passion we shared with all our friends? When did it go from being about sound quality to being about portability? When did we stop collecting rare albums and start disposing of files on a hard drive? Remember when that passion that was the soundtrack to our lives…

I want those days back! Let’s go back to enjoying music as it was recorded – in full dynamic range. Let’s listen to music on massive speakers with sub woofers booming instead of tiny useless ear buds. IPods are great. I’ve been a fan since they came out. As a matter of fact, I own 6! BUT, I still go to the record store. I still buy CDs. I still listen to music that is not compressed to the size of an MP3. Why? Because I love music. It’s my passion. I want the best sound and I music to be around forever.

This is my message: Buy the full dynamic range CD. You can touch it, you can read it, and you can worship it. You can always compress it to fit your MP3 player (by the way – iPods will play CD quality files. 10 times fewer songs will fit, but it’s supposed to be about quality, not quantity).

Most importantly stop downloading free files. It’s against the law first and foremost and eventually no one will be able to make music because there will be no money for production. It’s not about the greed of record companies. They will survive. They will diversify. It’s about artists and the need to protect their art.  [ END ]

WITHIN THE RUINS Premieres Live Video for “Red Flagged” Online 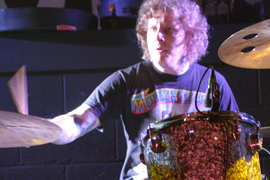