I recently had a chance to speak with Chapter 14 vocalist Chad Ackerman and guitarist Tanner Sparks about their newest release, Like Trees In November. This CD is a terrific mix of metallic hardcore infused with a ton of melody. Like Trees In November is an intense, fast and furious, tour de force of a disc that fans will absolutely dig. Thematically the disc is interesting as well and is based on the classic book, “Watership Down.” Here is what Sparks and Ackerman had to say about their newest effort.

Now that your brand new CD, Like Trees In November, is complete how do you feel about it? Are you satisfied with the outcome?
Chad: I am completely satisfied with how the EP turned out. I actually was shocked when I heard the first mixes that Brian Grider sent. The five songs were chosen out of about twenty songs. It was hard to choose the five, but I am glad we chose the ones that we did to debut our sound.

Tanner: I couldn’t be happier! I feel that this is the best recording we’ve ever released as Chapter 14. We had recorded many songs as demos in 2005-2006, but I believe Like Tree’s In November blows all of those old demos away.

What can fans expect when they pick up a copy of Like Trees In November?
Chad: Pure emotion, but good rock songs to bang your head to. Every song is very full of life and shows our influences. We have many different influences ranging from Bjork to Refused, and I think it shows in these songs.

Tanner: Heavy, catchy, groovy, and poppy all at the same time. Every song is different and unique compared to the next song. No matter what your favorite band (or style of music) is, you’ll find something in this EP that make you want to add this to your CD collection.

What was the writing process like for this CD? Did you guys all write together? How long did it take?
Chad: I wrote the basic structure and lyrics for all of the songs and then presented them to Tanner. I usually write everything on an acoustic guitar in a quiet place with no one around me. Then, when Tanner gets the basics of the song he turns it into a masterpiece. Being a 2 piece is amazing for us. Everything is pretty much 50/50. Even our rations of food.

Tanner: We love writing all different styles of music, and I feel this EP really gives everyone an idea of who we are. Most of the time Chad would come to me with most of a song he wrote, and we would start building off of each others’ ideas (as well as performing them with former members) from there. What some people may not know is these songs were written long ago, probably around 2005, and never really saw the light of day until now. Chad and I were fully invested in Destroy The Runner for the past couple of years, and had all of this material for Chapter 14 just waiting to be heard.

How quick are you in the studio? Can you usually knock things out in a couple takes?
Chad: Yes and no. There were a lot of songs where “one take” happened, but other times where we wanted a certain feel that needed multiple takes to get it right. Tanner is a machine. Sometimes we have to take his computer chip out to get a solo groovy or funk up a part.

Tanner: In the past we never really took the time to focus on the recording process as much as we did while recording Like Trees In November. Since Chad and I are the only members in the band, I recorded all of the instruments (guitars, bass, and drums) myself, at my own studio. I couldn’t have been more excited. This gave me lots of time to focus on every part of every instrument, and make everything the best we could. I knew it would be a first for us to produce a record like this, but that’s what made tracking this EP even more exciting for the both of us.

Are there any tracks on the disc that are personal favorites or that have good stories behind them?
Chad: “Winter” was a hard song to record for me. I wrote that song after a break up from a relationship that lasted 6 1/2 years. I think that you can hear the pain and the emotion in my voice on that song. I was screaming so hard in the studio that I was lying on the ground after. I am glad that “Winter” is recorded. I do not want to ever have to go through that again.

Tanner: It’s really hard for me to pick just one favorite song on this EP. We had so many songs written, and finally narrowed it down to these 5 songs that we thought would best bring Chapter 14 back into the world. And with that said, they’re all my favorite! Every song not only shows different sides of us, but also tells a unique journey that most people will be able to relate to in their own way.

What kind of touring plans do you have in support of this disc?
Chad: We are looking around for tours and talking to booking agents. Everything is D.I.Y. with Chapter 14. As of now, we have done everything ourselves, everything. We want to tour the globe, and we want to be constantly touring. We just need to find the right agent and get out there.

Tanner: We don’t have any shows booked, but I can guarantee everyone would know as soon as we did if we get any!

What artists would fans be surprised to find on your iPod?
Chad: My Brightest Diamond, Radiohead, Propagandhi, U2!

Tell me about a book or two that you’ve read that you think other people should read?
Chad: “Watership Down”! Pay attention to the fourteenth chapter in “Watership Down” (wink wink). Also, “A Game Of Thrones” by George R.R. Martin. Epic!

If you had not become a musician what other career path would you have liked to attempt?
Chad: I would have been an Elvis impersonator like my father. Maybe perform in Vegas and marry someone as well.

Tanner: I probably would be working for some sort of computer company. I’m that guy that always wants to have the newest piece of equipment out on the market. I’ve always loved technology, and would probably be striving towards a career working for a big computer company, like Apple, or Google.

If you were a superhero, who would it be and why?
Chad: Green Lantern, but Hal Jordan. There are other Green Lanterns, but I would choose Hal. He is the most inspirational to me and he has a pure heart. I have an ironed plastic Green Lantern figure that I made with kindergarteners at a daycare. He watches over me as I sleep. “Nerd Alert”.

Tanner: If there is a superhero that kills zombies, that’s who I would want to be. How can you top that?

What is the one thing you absolutely insist upon in your rider?
Chad: Women, weed, and Watchmen on Blue Ray. Well, forget the women and the weed… I just changed my mind.

Tanner: All I ever ask for is a bottle of water, and a lot of the time that doesn’t happen.

Any closing words?
Chad: I would just like to thank PureGrainAudio for doing this interview, and all of our fans. We are truly thankful for every magazine, website, publication, etc. that helps get the word out about Chapter 14. As for touring, we will be seeing you all very soon. Much love.

Tanner: We love to hear what everyone has to say, so talk to us. Even if it doesn’t have to do with music, talk to us about anything from music, to what you are doing for your birthday.  [ END ] 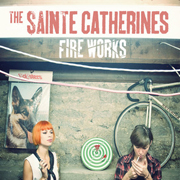 The Sainte Catherines – “We Used To Be In Love” [Song Review] 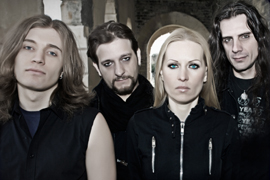